Ellen Walshe has won a silver medal in the 400m Individual Medley at the World Short Course Championships in Abu Dhabi, smashing the Irish record twice along the way.

The Dubliner, one of seven Tokyo 2020 Olympic swimmers among the 11-strong Irish team, broke the longest standing Irish record in the heats, swimming in a time of 4:30.78 and finishing fourth fastest qualifier for the final. She eclipsed the previous Irish record - set by Michelle Smith in 1994 - by over six seconds.

However that record lasted just a few hours as Walshe shattered it again in the final, claiming the silver medal behind Canada's Tessa Cieplucha, finishing in a time of 4:26.52.

Walsh is only the second Irish swimmer after Shane Ryan's Bronze in the 50m back-stroke in 2018, to take a medal at the world short course championships and is back in the pool on Friday in the heats of the 200 metres butterfly.

McSharry qualified for Friday's final in a time of 29.65 seconds to go through as the third fastest overall.

Another national record of the day came in the Men's 4x100m Freestyle Relay.

Calum Bain, Brendan Hyland, Jack McMillan and Jordan Sloan swam a time of 3:12.94 to finish ninth in their heat, but missed out on a place in the final by .2 of a second.

No Irish relay team has ever made it through to a World Championships final as yet - with one more opportunity still to come in this competition via Sunday's Men’s 4x200m Freestyle relay. 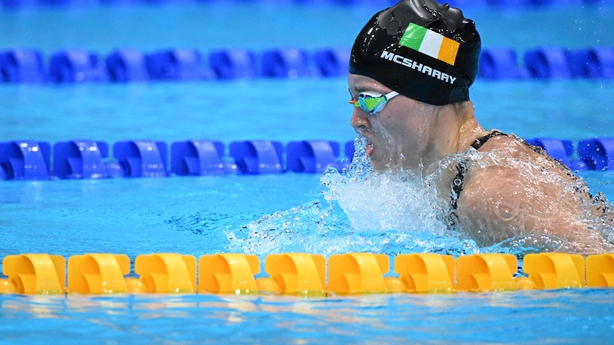 Tipperary's Finn McGeever was the first Irish competitor in the pool at the Etihad Arena, finishing 45th overall after the heats of the 400m Freestyle.

McGeever returns to action on Sunday for his main event, the Men's 4x200m Freestyle Relay.