Alex Murphy, the Oxfordshire born swimmer who has switched his allegiances to Ireland, completed a men’s breaststroke double when he won the final of the 100 metres Breaststroke on day three of the Irish Open Swimming Championships at the NAC in Dublin

Ninteen-year-old Murphy, who has qualified for the world championships in Kazan in Russia this August via his win in the 50 Breaststroke on Thursday, was the second fastest qualifier into the 100 final.

He turned fourth at the 50-metre mark but put in a terrific second leg to take the win in 62.41 seconds, holding off the challenge of US college competitor Ethan Browne.

Murphy is getting better with every swim it seems and he cannot be discounted as a possible contender to make the Rio Olympics in 2016, such is his recent progression.

The 50 Breaststroke isn’t an Olympic event though, and he would have to go below 60.57 seconds for the 100 to get on the Irish team.

His UCD coach Earl McCarthy said: “We are not putting pressure on Alex, but if he were to go in and around 61 seconds in the near future, then we would be having a conversation.”

Murphy’s UCD team Shauna O’Brien set the first Irish senior record of the meet when she won the women’s 100 metres Butterfly in 60.21 seconds, cutting .32 of a second off the old mark set by Bethany Carson back in 2012.

Fifteen-year-old Conor Ferguson of Larne broke his own Irish junior record when he took silver in the men’s 200 Backstroke in 2.03.12. 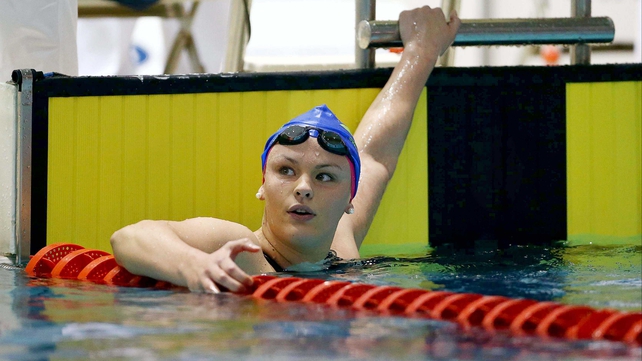 Having won the 800 Freestyle on Thursday, Grainne Murphy was also bidding to win the 400 Freestyle title.

The 22-year-old, who is now living and training in France, was the fourth fastest qualifier into the finals behind three US college swimmers who have so far dominated the four-day meet.

Murphy shook off the likes of 14-year-old Antoinette Neamt of Tallaght early on and with 100 to swim, the Wexford swimmer led.

However 15-year-old American Ruby Martin, already a winner in the 200 Butterfly and 400 Individual Medley events, powered though the last leg of the race to beat Murphy to the title in 4.16.37, with the Irish swimmer just over a second behind in second.

Murphy will be back in action in the final of the women’s 1500 metres Freestyle on the final day of competition which gets under way at 4.30pm on Sunday.

Tonight’s session got under way with the two Blue Riband races, the men’s and women’s 100 metres freestyle.

The women’s race went to US swimmer Katherine Drabot in 55.52 seconds, a time which is actually over half a second quicker than the Irish senior record held by Sycerika McMahon who is not competing at the NAC this week.

The men’s race though saw an Irish swimmer, 20-year-old Curtis Coulter of Ards, break the US winning streak winning the open title in a respectable 50.97 seconds.