By John Kenny at the National Aquatic Centre

Alex Murphy booked his place in the final of the men's 100 metres breastroke at the Irish Open Swimming Championships at the National Aquatic Centre.

On a day which was dominated by the visiting US college swimmers, 19-year-old Murphy's performance was the highlight for the home crowd.

Murphy, who has already secured his place at this summer’s World Championships in the 50m breaststroke, qualified as the second fastest swimmer for the 100m breaststroke in 63.61 seconds, the final of which is on Saturday.

"He has done brilliantly to make the world championship in Russia and that will be his main focus, but after that who knows. It’s still very early days in his relationship with UCD and Irish swimming," said his coach McCarthy.

Elsewhere, it was a clean sweep across all six individual finals and the two relays for the American swimmers.

Alex Lebed was the first American to grab gold when he won the Men’s 400m Individual Medley Final in 4:25.67.

Aer Lingus’ Ben Griffin retained the Irish title for the second year. He posted a time of 4:34.30 to hold off Galway’s Andrew Moore, who powered through the final 100 metres to finish in 4:35.95.

Caroline McTaggart won the women’s 50m Butterfly Final ahead of Irish record holder Shauna O’Brien. McTaggart’s time of 27.02 was enough to keep O’Brien in second as she touched in 27.19 seconds.

Earlier in the day, Emma Reid of Ards SC set a new Irish junior record in the event, knocking .06 of a second off O’Brien’s 2011 record.

Calum Bain took the Irish title in the Men’s 50m Butterfly final in 25.19 seconds with just .08 of second separating the top three swimmers. NCSA’s Ian Finnerty took the top spot in 25.15 while Tallaght’s Brendan Hyland was third in 25.23.

15-year-old Danielle Hill broke her second Irish junior record in as many days in the Women’s 100m Backstroke Final. Having broken Jane Roberts 2013 Record of 1:04.22 in the semi-final yesterday,

Hill took almost half a second off the time in tonight’s final touching in 1:03.72, the time also secured her the Irish title.

The NCSA swimmers controlled the men’s 100m Backstroke Final. Michael Taylor led the way for a first to fourth placing for the team posting a time of 56.20 while Ennis’ Rory McEvoy was crowned national champion in 58.45. 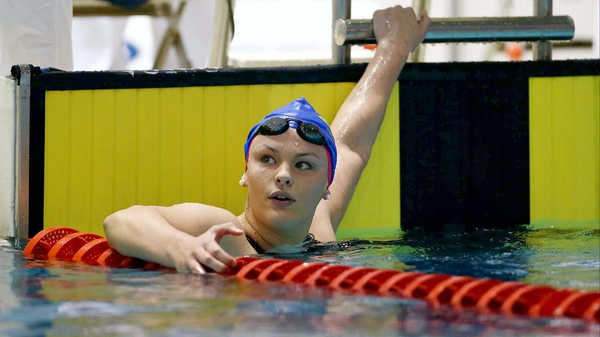