Al Mennie, renowned big wave surfer, took on a different challenge this March. The 6f5’ blonde Goliath from Portrush paddleboarded 30 miles across the Irish Sea from The Giant’s Causeway, Northern Ireland, to Islay, Scotland, to raise money for the Northern Ireland Chest Heart and Stroke Association.

Standing up for the first 12 miles of the journey, and travelling at about 4mph, the strong currents and chop were continually throwing Mennie off his board, and he resorted to paddling – an eventuality he had prepared for and expected.

Mennie also had to negotiate the middle bunk, a steep rise in the seabed, which caused his pace to drop to just 1.6mph. Due to the severe currents, in his words “hours four, five, six and seven become a blur of constant paddling”. 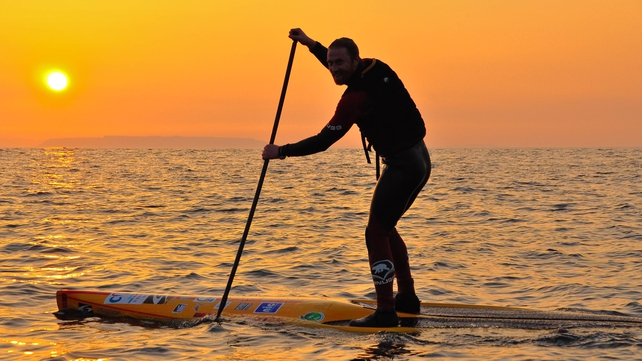 A severe fog meant that Mennie only saw the coast of Islay about ten miles from the shore.

With just 500m to go, he caught a counter-flow raging from east to west, which sucked him down along the coast, guiding him in to Scottish land, finishing his journey in a time of nine hours 25 minutes.

So, what does a beast such as this man eat for breakfast before paddling across the Irish Sea? And what preparation did he undertake for this behemoth task?

“Believe it or not, I had two bowls of porridge at 4.30am. And then I ate a whole bunch of bananas, because there is a superstition that you can’t keep bananas on the [support] boat. So, we don’t bring bananas on the boat,” said Mennie.

“So, I ate at 4.30am, I didn’t sleep anyway that night, then I started paddling for about 6am. My training before all that? I train for a lot of big-wave surfing. I had to adapt it.

“My trainer kept my weight sessions – I had two weight sessions a week. On those days I do two circuits as well. On a Tuesday and a Thursday then I had to do two sprints on a paddleboard, so either standing up or lying down.

“Depending on what the conditions were like, I would have done 40 minutes sprints.

“Then on a Saturday, I did a long distance. Like a marathon runner would build up the distances, I did that as well. I pretty much had five days of training for two months.

“Then I had a two-week window allocated to do the crossing in. We got really lucky with that good weather in March.” 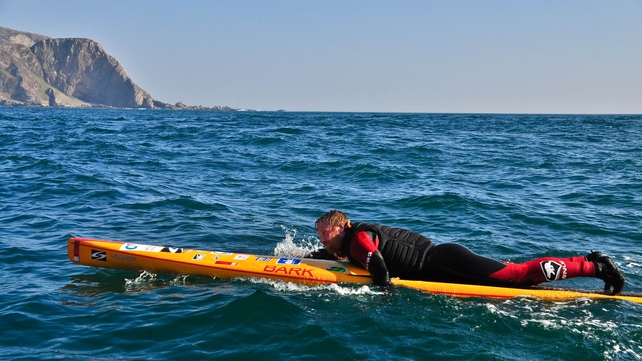 The surfer and paddleboarder has had a life-long affiliation with the water that has come about through several different factors.

“I’ve been interested in the water since I was very young. By the age of six I was waterskiing, by the age of nine I was surfing,” said Mennie.

“My Dad was a fisherman, he came from a trawler background. A lot of his family still work on the trawlers off the east coast [of Ireland].

“That got me into it. I used to fish a lot with Dad when I was young. Being by the sea, being in boats and that, it was a natural progression to go into the surf.”

Fear is the emotion that would cross many minds at the thought of paddling across the Irish Sea – but did Mennie have any trepidation about the crossing?

“My immediate answer is no. Because the fear I normally face is so different to that with big wave surf,” said Mennie.

“I was nervous because it hadn’t been done before, and I didn't have anybody’s advice to go on except for a couple of kayakers who had been on that stretch before.

“From that point of view I was nervous. There was the fear of that I suppose. ‘Am I going to make this against the tide and the currents?’

“I didn’t ever think I’d get lost at sea, or anything like that, whereas with the big-wave stuff, the fear is completely different, you’re fearing for your life if you get things wrong.” 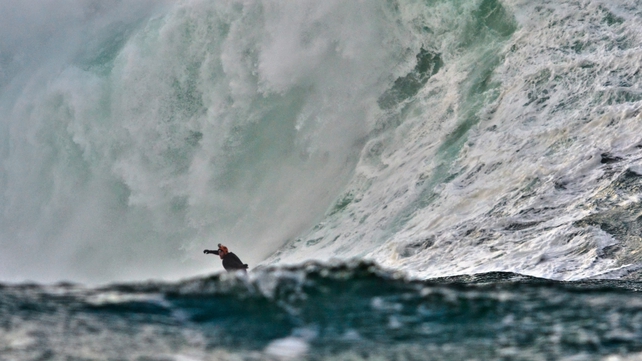 Mennie says he has seen many special things out on the sea, surfing or paddling, but that on this journey he saw something that truly knocked him for six.

“The strangest thing I saw was what looked like the Eiffel Tower coming down the channel – it was an oil rig being towed right up the channel to Aberdeen. There were two tug boats and this huge oil rig coming past, it was amazing,” Mennie said.

Mennie has played several sports and finds that they have all fed in to his passion for surf: “I was big into rugby when I was in school. I was probably more suited to that in stature. When I was younger I found it really difficult to do contests, because all the contests were on really small waves. And I was bigger and heavier than all the other surfers,” said Mennie.

“A typical surfer is about ten stone – I’m the complete opposite. So, big wave suits me.

“Since I’ve been doing Krav Maga, it helps my preparation for the surfing I’ve done.

As big-wave surfing enters the territory of riding 90-foot waves, the question of how big a wave man can surf is one that is at the forefront of the sport. But Mennie views this a different way.

“Between us all, riding these big waves, we’ve managed to develop boards that work here in Ireland, there’s boards in Hawaii that work with the big waves there. And the bigger the waves, the more the boards evolve.

“We’re now wearing two life jackets, some of us are wearing pull-chord suits that inflate to come to the surface. Some have air canisters for extra air if you fall.

“The technology that’s evolving around it, that could well be the future, in terms of what is humanly possible to survive. I do believe we will ride 100 footers. If it’s not me, it’ll be someone else across the world.

“I know off the coast of Ireland and Portugal, if we get the storm, we’ll get the big waves. We just need the biggest storms, we’ve got the locations for it: Mullaghmore; Aileens, Co Clare; and all the other ones we know of.”

But there are dangers, very real dangers, to this high-risk activity.

“The main danger is you fall and you get held under water and you don't get released, and you get rag-dolled. I’ve fallen in waves and had my fibreglass helmet broken. I’ve had life jackets ripped off through violence under the water,” said Mennie.

“I’m never under the water going, ‘I can’t hold my breath any longer’. I’m going, ‘What’s going to come off?’ If that’s happening with 50-foot, 60-foot waves, what’s it going to be like twice that? That’s the unknown and nobody’s fallen in one of those waves yet.

“Because there’s such a small number of big-wave surfers, there haven’t been that many serious fatalities. But it happens.” 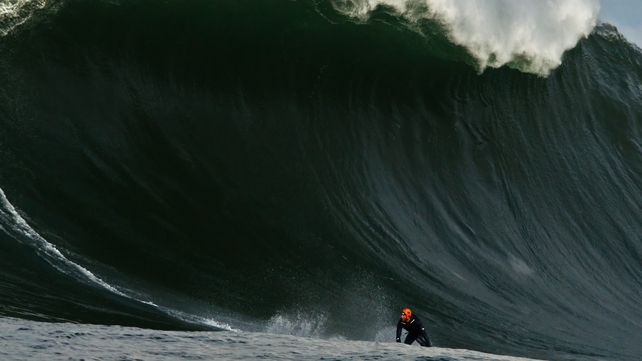 For those that have the guts and the desire to do what Mennie does, he says preparation is key. And for him personally, avoiding the limelight.

“The first thing I do is get on the phone to Andrew Cotton. We’ll be on the phone all the time looking at the charts. Then he’ll arrive, and once he arrives we’re into prepping all the equipment,” said Mennie.

“We’ll go through all our boards and make sure everything is the way we need it and the way we want it - have we got the right fins?

“If we’re towing, [using a jet ski to pull each other’s surf boards along] are our straps in the right place? If we’re paddling, are our boards the ones we need, the ones we want? We go through all that.

“Then, personally, I like to be on my own for a while. I don't like the hype. In recent years here in Ireland there’s been a serious amount of hype, especially around Mullaghmore Head.

“We would have surfed on our own a lot there in the past. But in recent years it’s been like a football scene with people watching.

Al Mennie was in conversation with Tadhg Peavoy on 10 April 2012.

All photography used above is courtesy of Conn Osborne.

To find out more about Mennie and his sport, visit www.almennie.com.