Leicester defender Wout Faes suffered the ignominy of scoring two own goals at Anfield to hand Liverpool a 2-1 victory which moved them within touching distance of the top four.

And when the Belgian, in his first season at the club after a £15million move from Reims, thought his embarrassment could not get any worse he was taunted by second-half chants of 'shoot' from the Kop whenever he touched the ball.

The 24-year-old's calamitous seven-minute spell leading up to half-time handed Liverpool a lifeline they barely deserved after comedic defending of their own had allowed Kiernan Dewsbury-Hall to waltz down the middle of the pitch unopposed to score from Leicester's first attack.

Both teams and sets of fans had come together before kick-off to celebrate the life of Pele, and also former Reds striker David Johnson, but there was little to reflect 'O jogo bonito' in the first half.

Liverpool's holding midfielder Fabinho was left out of the side due to the imminent birth of his first child and his absence was felt inside just four minutes after some amateurish defending.

When Dewsbury-Hall picked up the ball 50 yards out he had only Ayoze Perez ahead of him 10 yards offside but having easily brushed off Jordan Henderson, in the Fabinho role, he used his team-mate as a useful decoy.

Left-back Andy Robertson, expecting the pass, stepped up to play Perez offside and left a gaping chasm between himself and Virgil van Dijk and Dewsbury-Hall could barely believe his luck as he ran through unopposed to clip a shot over a bewildered Alisson Becker.

It was the seventh time in 2022 Jurgen Klopp's side had conceded in the opening five minutes.

And then came the chaos. First goalkeeper Danny Ward was spared Salah scoring after he blasted a kick into the Egyptian due to Alex Oxlade-Chamberlain being offside.

But the former Liverpool keeper was not so lucky when he called to claim Alexander-Arnold's low cross to the near post only to see Faes slice an attempted clearance up and over Ward and in at the far post.

The home side sensed an opening and Van Dijk headed a corner wide before Nunez was sent running through by Oxlade-Chamberlain's touch and dinked over Ward.

As has been the Uruguay international's luck recently, the shot rebounded off the post - but the back-tracking Faes only succeeded in hammering the ball into the net.

The next 45 minutes were excruciating for the Foxes defender who was taunted with every touch, made worse by the fact Liverpool were attacking the Kop end and having the better of it.

Barnes shot over and Henderson volleyed just wide as the teams traded chances but Salah should have put the result beyond doubt from Nunez's brilliant through-ball but scuffed wide with his right foot.

But still Leicester came and Alisson got down well to save from Barnes, before Nunez fired over after a one-touch pass sequence involving Salah and substitute Naby Keita.

Barnes' blushes at hitting the crossbar when he should have scored were spared by an offside flag before Nunez forced Faes into yet another error which resulted in Ward saving from Salah.

Four successive league victories - for the first time since April - have moved Liverpool within two points of fourth-placed Tottenham while Leicester, after their pre-World Cup renaissance, have now lost back-to-back games and remain just four points above the relegation zone. 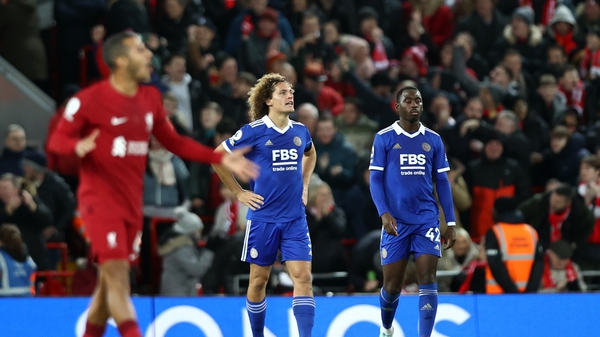