Jude Bellingham says he is ready to be England's dog of war when they face France in the World Cup quarter-final on Saturday night.

The Borussia Dortmund man has stood out in an England team that had the best group-stage record in Qatar and saw off Senegal 3-0 in the last 16 to set up a clash with reigning champions France at Al Bayt Stadium.

At just 19, Bellingham has drawn plaudits from all quarters, with England team-mates Jack Grealish and Phil Foden tipping him to become the world's best midfielder in the coming years.

While he may be quiet and unassuming off the pitch, Bellingham has been running games on it - revealing he has a bit of "dog" in him when he crosses the white line.

"I think when you've got the dog, you're just born with it, really," he said.

"The way I was raised in football, you had to have that dog in you a little bit and I go into the games knowing every game's a war and you got to be up for it. I think that's something I have.

"There was a foul (in the Senegal game) that I didn't think was a foul, I kind of held onto the ball and moved up, me and the lad were both just staring at each other for a minute straight and I just think, 'don't be the one that loses'.

"I feel like off the pitch, I'm a nice guy but when I get onto the pitch, something kind of takes over me, to be honest, I feel like you've got no friends out there except the ones wearing the same kit.

"Anyone who is not wearing that, it's, it's kind of, no beef... but there is something that's a little bit personal."

Bellingham has been partnered in midfield by both Declan Rice and Jordan Henderson in the past two games, with England scoring a combined six goals and keeping two clean sheets.

Henderson, 32, is 12 years Bellingham's senior and the former Birmingham youngster has been full of praise for the Liverpool captain.

"He's always kind of the loudest player on the pitch - which I love," Bellingham told 'The Diary Room' on England's YouTube channel.

"You always know you're in a game. He doesn't let you switch off for one second and the best thing about him is he will give you a bit of detail to help you, maybe after you've done something negative.

"But he's also the first person to let you know if you've done something positive. His performance against Senegal was incredible. Ran the game, scored a key goal. It was a pleasure to play with him again."

Bellingham crossed for Henderson to open the scoring against Senegal before the pair locked eyes and went head-to-head in an intense celebration.

"That was completely off the cuff," revealed Bellingham.

"We've never even spoke about it. Obviously, we're spending a lot of time with each other at the minute, but I think it's turned into something that's a bit iconic.

"To be honest he got so, like, close and I was thinking 'right, if this is what we're gonna do we have to commit, don't we?'

"So I had to just turn on the core a bit and lean forward to get in a more comfortable position. But it was a good moment, those celebrations, something that lives forever and hopefully people will be talking about it for a long time." 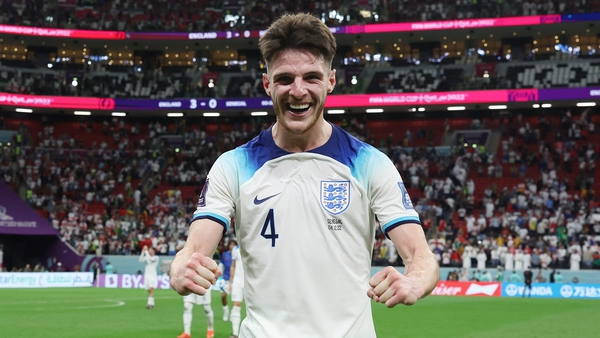