Cristiano Ronaldo's role for the remainder of the World Cup is something that has to be "defined", Portugal boss Fernando Santos said after dropping his captain for their emphatic last-16 win over Switzerland.

The 37-year-old was only named on the bench as Benfica forward Goncalo Ramos - who hit a hat-trick on his full debut to secure a comfortable 6-1 victory and set up a quarter-final clash with Morocco.

Ronaldo's name was chanted around Lusail Stadium before he was introduced in the closing stages, having been left out of a starting line-up at a major tournament for the first time since Euro 2008.

Asked about Ronaldo, who left Manchester United under a cloud during the finals, Santos said: "That is still something that has to be defined.

"I have a very close relationship with him - I always have, I have known him since he was 19 years old.

"This relationship only develops, Ronaldo and I never interpret the human aspect of that of manager and player (in relation to) what we have to do during the match. I will always consider in my role that he is an important player to have in the team."

When asked directly if Ronaldo would play against Morocco, Santos replied bullishly: "Ronaldo will definitely (be involved), all the players on the bench can be used, if they are not in the starting line-up they can play later.

"It is important to look at the example of this player's history, he is one of the best players in the world at playing professionally, being captain - all we have to do is think about this team collectively."

Ramos had played just 33 minutes of senior international football before his stunning display in Qatar but Santos said the forward had "stood out" before he threw the 21-year-old into the limelight.

Ramos thrashed in a spectacular left-footed strike 17 minutes into his full debut, which Pepe added to with a powerful header as the 39-year-old became the oldest goalscorer in World Cup knockout history.

Portugal continued in the ascendancy after half-time as Ramos turned home from close range before playing in Raphael Guerreiro to open up a four-goal advantage.

The Benfica striker was disappointed to flick on a Swiss corner for Manuel Akanji to pull one back but became the first player in Qatar to score a hat-trick by coolly clipping over Yann Sommer.

The crowd chanted Ronaldo's name and got their wish as he came on, with the star seeing a goal disallowed for offside before fellow substitute Rafael Leao curled home a beauty.

Ramos admitted that his elevation to the start XI caught him by surprise "I think not even in my wildest dreams I thought about being in the starting 11 for the knockout phase," he said.

Asked if Ronaldo spoke to him before the game, Ramos said the issue of him being benched did not come up among the players.

"Honestly, in our team, no one talked about it. Cristiano as our captain, as he always did, he helped us, he gave encouragement to us, not only to myself, but our team mates."

Switzerland coach Murat Yakin conceded Portugal had been the better side but said whether Ronaldo started or not had no impact on the result.

"We have to admit that our opponent today was better, faster and more offensive," he said.

"Unfortunately, our game plan didn't work out and we have to accept that and I congratulate our opponents on this win. Defeat is painful, we are sad about how we played.

"We had a clear game plan, we had practised it, we also had test games and the team was familiar with the system and formation.

"Whether Ronaldo is playing or not, all of our players are able to play football but the opponent got into the game better and we didn't manage to get a good start, we saw that many things didn't work out for us." 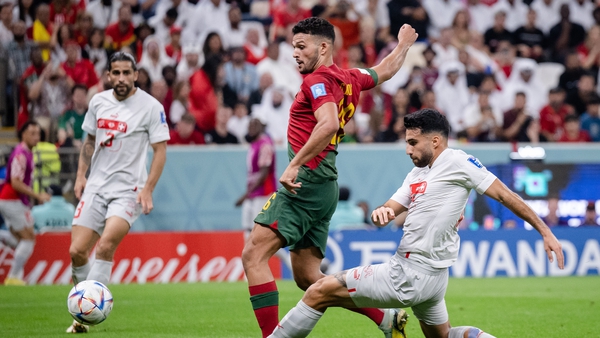