FIFA president Gianni Infantino hit out at criticism of Qatar from Europe on the eve of the World Cup.

The game's global governing body has been criticised for its decision to take the finals to Qatar, where the treatment of migrant workers and the rights of LGBTQ+ people have been in the spotlight.

Ahead of the opening game of the tournament on Sunday, Infantino said: "We have told many, many lessons from some Europeans, from the western world.

"I think for what we Europeans have been doing the last 3,000 years we should be apologising for next 3,000 years before starting to give moral lessons to people."

"Of course I am not Qatari, I am not an Arab, I am not African, I am not gay, I am not disabled. But I feel like it, because I know what it means to be discriminated, to be bullied, as a foreigner in a foreign country. As a child I was bullied - because I had red hair and freckles, plus I was Italian so imagine.

"What do you do then? You try to engage, make friends. Don't start accusing, fighting, insulting, you start engaging. And this is what we should be doing."

Infantino, who took a range of questions after the lengthy speech, remains adamant that members of the LGBTQ+ community will be safe and welcome in Qatar, despite the country's laws which criminalise same-sex relationships.

"Everyone is welcome. If you are a person who says the opposite, it is not the opinion of the country and certainly not of FIFA," he said.

"Everyone who comes is welcome, whatever religion, race, sex orientation, belief she or he has. This was our requirement and the Qatari state sticks to that requirement."

Asked whether Qatar could move the goalposts on these commitments, citing the late change on the sale of alcohol at stadiums, Infantino replied: "It's never too late to change, maybe we will have to change on other topics but when it comes to the security of people, when you speak about LGBT people, everyone's security is granted from highest level of country.

"That is the guarantee we gave, and we still give it."

Infantino went on to insist that he is "200% in control" of the World Cup in Qatar despite the ban on alcohol sales at stadiums raising questions over who was really in charge.

Football's governing body confirmed on Friday it had pulled plans to sell Budweiser - the tournament's official beer - within the stadium perimeters. It has been reported this late U-turn was heavily influenced by Qatar's royal family.

However, Infantino was adamant his organisation had not been railroaded by the hosts.

"Every decision is taken in partnership with the Qatari government.

"If this is the biggest issue we have for the World Cup, I will sign for it immediately and go to the beach and relax until the 18th of December.

"Let me just assure you that every decision taken at this World Cup is a joint decision. Every decision is discussed and debated and taken jointly. There will be many big fan zones, eight to 10 fan zones, where you can buy alcohol. Up to 100,000 people can simultaneously drink alcohol.

"I think if, for three or four hours a day, you cannot drink a beer, you will survive. Especially, because actually the same rules apply in France, Spain, Portugal and Scotland where no beer is allowed in stadiums."

Infantino's remarks that he "felt gay" were criticised on social media, but at the end of the briefing, FIFA's director of media relations Bryan Swanson defended the Swiss' motives.

"We have received assurances that everyone is welcome and I believe everybody will be welcome. Just because he is not gay does not mean he doesn't care. He does care.

"We care about everyone and are inclusive." 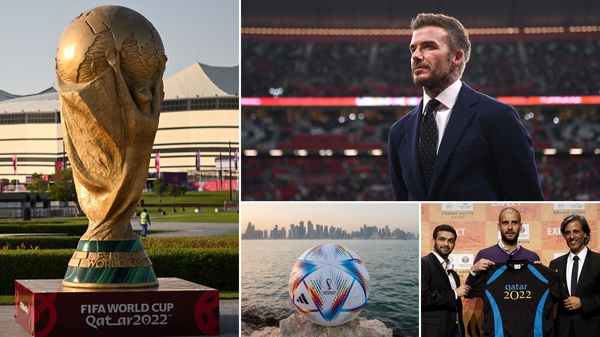