Louise Quinn hailed the Republic of Ireland's "spirit" and "bond" after she marked her 100th international appearance with a 16th goal – and the first she’s ever scored with her foot in an Irish jersey.

Prior to Monday evening’s 4-0 friendly win over Morocco, all 15 of Quinn’s Ireland goals had been headers. She changed that in Marbella – albeit the goal was, essentially, a tackle as she charged down an attempted clearance only to see the ball cannon into the net.

The centre-half picked up the player of the match afterwards as a special occasion was marked with another victory.

"Being captain made it a great occasion, it really means a lot to me, to mark it," said Quinn.

"But now I just want to keep leading us forward towards the World Cup.

"Everything we’ve done this year since we started is what we wanted to achieve. We have done it together.

"Everyone has brought their game on, the team spirit, the communication, the bond we have is second to none. It comes from the staff, the players who are here and not here.

"And we can’t wait for [the next international window in] February to get started again."

The scoreline was a little flattering to the Girls in Green who were 2-0 up after eight minutes and then toiled for almost an hour against an under-strength Morocco, who are ranked 76th in the world.

Nice way for defender Louise Quinn to mark her 100th cap, by scoring with a tackle...

Quinn admitted Ireland took their foot off the gas but kept things in perspective as a "dream" year ended with another win.

"We started the game really well, moving the ball well and getting into positions, making them make mistakes, finishing chances," the Birmingham City defender added.

"The first 25 minutes were very good but then we got complacent and sloppy.

"We picked it up at the end and finished strongly. It was a clean sheet and nice to get a goal. I was trying to block a ball and luckily it went in. I just pounced on it but I’ll take it. An absolute first for me not being with the head! Anything that goes in is so special in international football.

"It’s been a great end to the year for us. It’s been a dream come true." 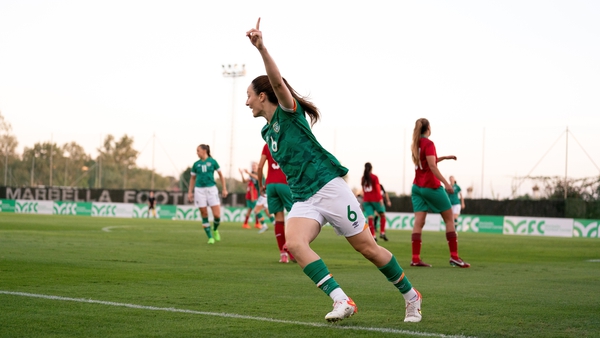