Defender Paddy Kirk is back at Bohemians after penning a multi-year deal with the Dalymount Park club.

Kirk, who came through the Bohs U-19s before making his first-team bow in 2018, has spent the last two years Longford Town and Sligo Rovers respectively.

He's Declan Devine's third new signing of ahead of the 2023 campaign following the arrivals of Keith Buckley and Adam McDonnell.

"I am proud and grateful to have the opportunity to play for the club again," said the 24-year-old.

"Having seen last year, I wanted to come back and try and make things better. To have the opportunity to do that, it means more now, and I am as excited as I have ever been.

"I feel I'm coming back a better player, a better person, and with a different mentality."

Full-back Kirk admits he is impressed with new boss Devine's plans and is looking forward to what the future can bring when the club returns to a full-time and morning training set-up in the new year.

He added: "It was always in my head that I wanted to come back but it's not something I wanted to rush either, and I wouldn't have done it if I didn't feel the club was going to be in the right place next year.

"When I met with Declan, I was a little cautious before meeting him that I didn't want to jump straight in at the first opportunity. But from talking to Declan, you could tell straight away that he has the right values and that he wants the right things for the club." 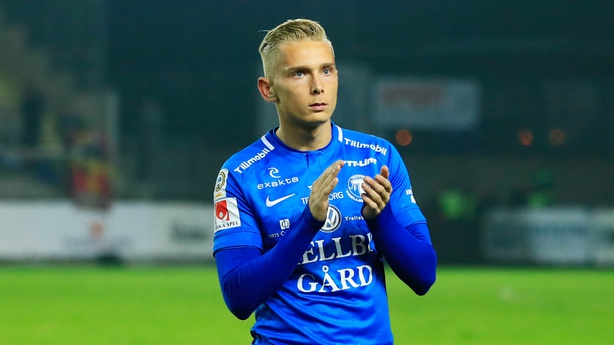 Sligo Rovers have brought in right-back Johan Brannefalk [above] from Swedish team Norrby IF.

The 24-year-old has spent his last two seasons at Norrby and had spells at Ljungskile and Trelleborg after spending time as a youth player with Malmo.

Brannefalk will move to Sligo and begin preparations along with his new team-mates next week when the team reports back for the first time since the end of the 2022 season.

Bit O' Red Manager John Russell is thrilled with the signing. "He is an attacking full-back who will fit in perfectly in how we want to play," said Russell.

"He possesses a great passing range and crossing ability. Johan comes to us at a really good stage in his career. He has plenty of experience in the top two tiers in Sweden and I know he’s looking forward to this new challenge at Sligo Rovers."

Brannefalk s relishing the chance to prove himself in Ireland, adding: "I was flattered to hear Sligo Rovers were interested in me and I started to research how the club played football and how I would fit in at the club and in the league. It became very clear to me that playing for Sligo Rovers was the perfect next step for my career. And the picture of the club matched my expectations when I spoke to John.

"The main reason is the ambition for the club, all the fans that support the club, and the vision I have for myself playing for Sligo Rovers.

"My ambitions for 2023 is the same as all the club’s. I want to win every game we play. That is of course not realistic but that is the mindset I go into every game with."