An early goal, the spine of the team full of experience, the athleticism of his players, their consistency throughout the season, and perhaps most notably the big grass pitch at Lansdowne Road.

Derry dominated proceedings from the opening exchanges in the season-ending showpiece and while they could have taken the lead inside the opening 60 seconds, they deservedly went ahead in the 18th minute following an excellent move that ended with a fine Jamie McGonigle finish.

Another moment of scintillating play down the opposite flank led to the second strike as Cameron McJannet started and finished a fine move.

Shelbourne offered little in return and by the time the third goal arrived in the 61st minute, again McJannet taking the credit, the cup was already on its way back to Derry for the first time since the 2012 cup final when City beat St Patrick's Athletic in 2012.

"To win the cup is special but to win it in the manner that we won it is extra special," said the delighted Derry manager, speaking at the post match press conference.

"The early goal definitely helped. I think the big open spaces for the pace of our front three caused them problems. I was delighted to see that first one hit the back of the net and we grew in confidence from that.

"You make decisions and sometimes it goes for you and sometimes it doesn’t. But having the big grass pitch here, the size of it, the athletes that we have in the team ate the ground up and our top, top players came to the party today.

"We had more experience in our team. The experience we had right through the spine of the team, Connolly, Dummigan, Duffy, McEleney, McGonigle who has played in two Irish Cup finals in the North as well. Players who have navigated massive matches in their career.

"And the ones who haven’t played on this stage would get extreme confidence from that and it will be huge for them in their futures."

"I don’t want to start singling players out," continued Higgins, before singing the praises of most of his players including goalscorer Cameron McJannet, Ryan Graydon, Brian Maher and captain Patrick McEleney, among others.

"You look at Cameron McJannet today. A lad from Milton Keynes who came over here a few years ago to get his career going. He is one of the most underated players in the country without a shadow of a doubt and I’m delighted for him.

"Ryan Graydon is an unbelievable athlete, he’s a greyhound. He has played in the First Division for most of his career and you can see when he gets space to run in to, the damage he can do. He was a fantastic signing for the club and he will only get better.

"You can play with 11 outfielders when you have got Brian [Maher]," continued Higgins. "He is the best in this country that I have ever seen with the ball at his feet. He is a continental-style goalkeeper and we are glad to have him, and he is one who will have a massive future in the game.

"Patrick McEleney has just played his seventh cup final and won four. People have spoken about his injury record and stuff like that, but he has played the guts of 30 games for us this year. From the summer on I think he has been one of the outstanding players in the league.

"A lad from Shantallow who was a season ticket holder for Derry for years, travelled up and down the country, and that’s the truth, he travelled everywhere.

"To see him lift the trophy made the hair stand up on the back of my neck. For the likes of him coming back here makes it all worthwhile."

And Higgins also had a special word for assistant manager Alan Reynolds, who he credits for helping the side out of their mid-season slump and has proved instrumental to bringing the silverware to the club.

"Alan Reynolds is one of the shrewdest football people in the country. He’s from Waterford, he’s got a wife and kids, and the sacrifices he has made for me. He deserves so much credit. He’s been fantastic.

"In May when we had a difficult period his experience was huge, his nous and know-how. Delighted for him as he’s lost the final as a manager many years ago. He said this week would go a long way to removing the scars. We’ll enjoy a few days together, a few pints and listen to live music."

Higgins also took time to remember some former team-mates and legends of the club, most notably Mark Farren and Ryan McBride, who both died in recent years, just 33 and 27 years old respectively.

The manager said that the squad watched a documentary about the club on the bus down to Dublin to help remind the newer players about the important history of the club and what it means to the people of Derry City.

"Mark Farren and Ryan McBride and all those people who have history with the club and have left us too young, I couldn’t get them out of my head all week and this morning. I’m sure they’ll be looking down on us," said Higgins.

And Higgins knows that with success comes increased expectation, and it is something that he welcomes as he hopes his side will use the cup victory as a springboard for future honours.

"Next year there will be more expectation to deal with. The players will have to deal with it and so be it, it's great. Hopefully this can be a springboard for us, we can't take anything for granted.

"You would hope that what it will do is it will give our players real hunger for more and to get greedy. You want the players to get greedy, to want as much success as possible. We can’t promise anything.

"What we can promise is we will do our very, very best. Shamrock Rovers are an exceptional team in what they have done over the last few years and they deserve huge credit. But it’s up to ourselves, St Pat’s, Dundalk, Shelbourne, Sligo, Bohs, all these clubs, to try and close the gap. We are working extremely hard, but there is a bit of work to do to get to that level."

As for the big grass pitch, it was noticeable that Higgins made several references to it as his side play their home games on an artificial surface, and while the manager admitted that he had no say in such decisions, he would ultimately prefer to have something similar back at the Ryan McBride Brandywell.

"That's above my paygrade," said Higgins. "That won't be me making the decisions, it's Council owned, the Council have been brilliant to us, they've worked with us, if you're asking me would I prefer a big grass pitch? The answer is yes.

"I can't speak highly enough of our Council and how they've worked with us, the relationship has grown over the last year, 18 months. If it changes to a grass pitch, brilliant, if it doesn't, then we'll deal with it."

Higgins finished with a squad update, stating that he was happy with the players that he has signed up for next season, while there was just a couple that he needed to speak to over the next few days.

However, he was very excited to see a famous face clad in candystripes as the team went up to receive the trophy at the end of the game.

"He [James McClean] was up where we were lifting the trophy with his Derry jersey on," said Higgins.

"Someone said the camera went on him during the game. And I heard he was signing a three-year deal with us last week as well. I’m looking forward to him joining the club in January!" 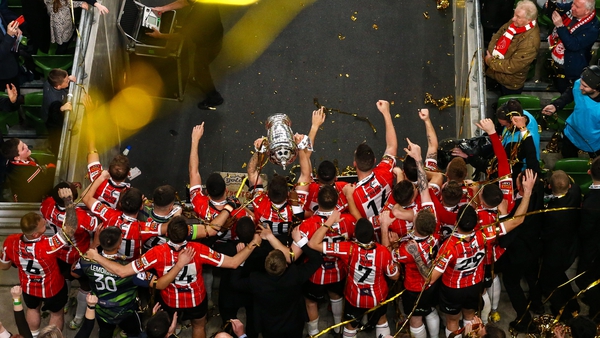