Australia, Canada and Nigeria represent tough opposition for Republic of Ireland at next year's 2023 FIFA Women's World Cup but Vera Pauw's side need not fear that trio according to Lisa Fallon.

The Irish side will feature in a major tournament for the first time ever when it kicks off in Australia and New Zealand next summer, with all the games to be screened live on RTÉ.

On Saturday, the scale of the dream challenge became clearer as the Girls in Green were pitted into a difficult group featuring the co-hosts, the current Olympic champions and Africa's most successful side.

Pauw's squad will open the campaign in Sydney against Australia on 20 July, before travelling across the vast country to Perth for a match versus the Canadians before rounding out the group five days after that in Brisbane against Nigeria.

While it is one of the more challenging groups Ireland could have been landed with, coach and analyst Fallon feels it shouldn't hold many fears.

Speaking from India where she is attending the Women's U17 World Cup, Fallon told this week's RTÉ Soccer Podcast, "There are probably one or two other groups that could have been slightly tougher.

"Australia, Canada and Nigeria is a tough group but I really believe there is nothing to fear in this.

"Ireland played Australia not that long ago in Dublin in a friendly and won that game and that was probably the game that was the catalyst for the change in the mentality, belief and confidence in the team after a number of games against higher level opposition. That was the first team that Ireland really got a result against and that was a strong Australia team we played that day.

"Sam Kerr was there, got very frustrated, Ireland got the game-plan right and it worked. I think Ireland will take a lot of confidence from that. I think it's probably a game Australia wouldn't have wanted."

Fallon added that while a friendly in Tallaght might not correlate with a game on the biggest stage in Sydney, the pressure will be on the Matildas, coupled with the expectation that Irish fans Down Under will make it feel less like an away match than normal.

Canada meanwhile won the Olympic football tournament last summer in Japan but as Fallon pointed out, that journey saw them win just twice in normal time.

But a resolute 4-4-2 diamond formation makes them an intriguing prospect for Ireland, Fallon added.

"They were really effective in that competition, they beat the USA for the first time in their history as well so that's a really good Canada team," she said.

Fallon has been able to observe the Nigeria U17 and U20 sides closely at major underage tournaments recently and some of those players could graduate into the senior team by the time Ireland come up against them.

"Their Under-17s knocked out a really good USA team in the quarter-finals of this competition here so I think we'll possibly see a couple of players that we've seen from these tournaments going into the Nigeria team," she said.

"Nigeria are a really explosive, counter-attacking, fast team. They like man-marking and it'll be a very open game but a really different challenge to the more structured approach from Australia and Canada. They're a good team and will cause problems."

With a talented trio of teams in the group, Fallon believes they will take points off each other which should aid the Irish cause.

"I think that favours Ireland. There's no team there that we should really fear. They're tough games but I think they're certainly games Ireland can get points from," she added. 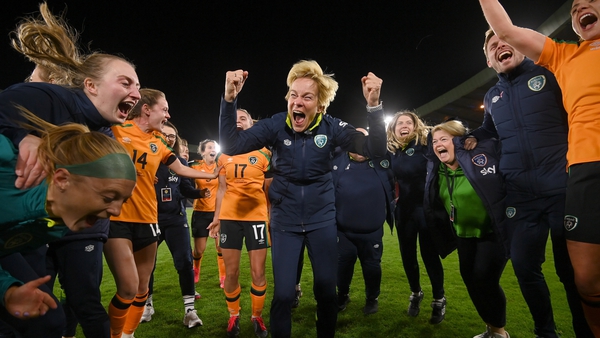