Liz Truss' spell as the boss in Downing Street seems like an eternity compared to the title race, which flirted but ran aground in no time at all as Shamrock Rovers showed why they are champions.

This was a stirring night in Tallaght, almost 7,500 fans – the away section sold out – witnessing a rampant Hoops performance, putting to bed doubts that their busy schedule had opened a door for Derry, who fell short at home to Shelbourne and now must climb a mountain.

Truly the Hoops illustrated why they are champions by overcoming a terrible start to trounce Saint Patrick's on what will likely prove the deciding night in the title race – such as it was.

Serge Atakayi had the visiting fans in dreamland on four minutes but that was as good as it got for the visitors, Graham Burke scoring a penalty in either half, between which defenders Dan Cleary and Sean Hoare put Pat's to the sword – even if the Saints missed a penalty of their own to potentially make a game of it in the second half.

Rovers emptied the bench towards the end as Pat's looked at the clock, this a reality check given their own excellent form – and they remain very much alive in the fight for third place.

Before anyone could get their breath, Saints were ahead. Atakayi, who has made such an imprint since he joined Pat's, stole in at the back post after Hoare made a mess of clearing a hopeful Sam Curtis cross.

Rovers got a hold of the ball but Atakayi's pace was troubling them and Pico Lopes, getting back into his grove post-injury, made a crucial block on 15 minutes as the Congo native sensed a second.

Rovers were soon in total command of the ball and the pressure paid off ten minutes before the break. A beautiful Lopes pass fed Lyons and he played in Burke; Joe Redmond need not have made a rash challenge but he did – and there was little doubt that the technician Burke would score.

Gaffney then dragged a shot wide as Rovers fans sensed Saints were on the ropes, which they were, Richie Towell's shot from the corner meeting a body of worried legs.

Hoops led again just before half-time – and it was due. Cleary will go down as a massive player in this title win – he scored twice in the 3-2 win over Shelbourne lately – and he hooked home from a corner.

Graham Burke had clearly pushed Chris Forrester but referee Rob Hennessy missed it and all Pat's had to show for their protests was a scatter of yellow cards from Hennessy.

Jack Byrne went off injured five minutes into the second half and that would have given some hope to Pat's, who started the second half well. His replacement Dylan Watts is no mug and had his shot cleared for a corner as Rovers pressed for a third.

From the corner, Chris McCann's shot wasn't cleared, and Hoare blasted home in front of the home fans to put Pat's to the sword.

As the hour mark approached, Gaffney twisted and turned, Danny Rogers batting away as Saints struggled for breath.

The short-lived drama of this title race was beautifully summed up halfway through the half as the home fans celebrated Shels taking the lead at Brandywell seconds before Saints were awarded a penalty for a handball. However, substitute Tunde Owolabi's effort was the sort of strike the keeper saves – as Alan Mannus did – as long as he guesses right.

Whatever doubt remained dissipated with 16 minutes to go as Anto Breslin was red-carded for handling on the line, Burke doing the needful. Towell and Watts both came close to making it five as Saints prayed for the end.

The title race will soon be there. 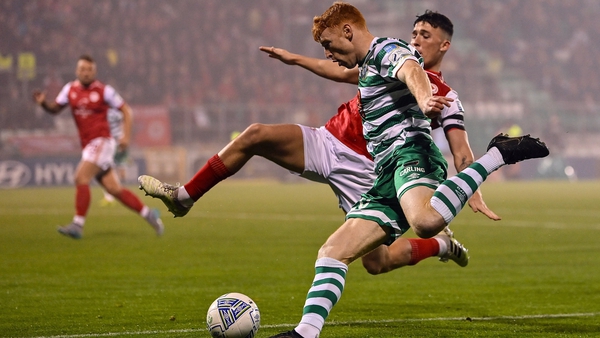