Republic of Ireland manager Vera Pauw dedicated her side's World Cup play-off triumph to the women of Ireland and revealed that match-winner Amber Barrett promised her a goal if she brought her off the bench.

Barrett’s crucial second-half strike gave Ireland a 1-0 victory away to Scotland and that was enough to secure their place at next summer’s World Cup in Australia and New Zealand.

Ireland’s success is all the more remarkable given the fact that it’s only five years ago that members of the squad threatened strike action over what they saw as years of under investment and neglect towards the squad.

The women’s game has gone from strength to strength since then and qualification for the World Cup marks a new high point, which Pauw believes will help the sport grow even more.

Speaking on Morning Ireland, she said: "It’s not only the game here, it’s for all women in Ireland. If you really want something and you put all your effort in it together as a group, then anything is possible.

"That determination came from players and staff and the FAI and everybody around us that has given the sacrifices, investment and support that we needed.

"But it’s those tigers on the pitch that have do it because the discipline they put in is unbelievable.

"Maybe Atletico Madrid can match it but I have never seen another team that’s been so disciplined in the gameplan that we set-up."

Pauw went on to say that match-winner Barrett, who came off the bench in the second-half for Ireland, had promised her a goal if she was given the chance.

Barrett has previously played as a striker but more recently is being deployed as a right-back by her club Turbine Potsdam in the Frauen Bundesliga.

Ireland came into the game with significant injuries in key positions, which forced Pauw into rethinking where Barrett should be deployed and the manager was in no doubt that the Donegal woman would step up.

"Amber wasn’t really the first person to put on at that moment," she said. "We were thinking about what our options were because with all our injuries we did not have much options to change things.

"But somehow I felt deep down inside that Amber was the one that could go behind the defence.

"During the week she said; ‘Vera if you put me on I will put a goal in, I will score’. After doing it she said to me ‘I told you that I would do it’.

"We needed someone to go long because that was our only chance. The gameplan was to stop Scotland from scoring and on the counter to get behind the defence.

"With her, we felt she’s the one that was so determined to get there.

"I think there was a special thing over her that she wanted to do it for the community in Donegal that has given her something extra. I have no words for it, I will always remember."

Ireland’s triumph comes towards the end of the difficult year for Pauw personally.

In July, Pauw released a statement alleging that she was raped as a young player in the Netherlands. The Ireland manager revealed she had suffered abuse and serious sexual assault during her time as a player and coach in Dutch football.

While she admitted that there have been times when she just wanted to see the back of 2022 and put it behind her, Pauw thanked her squad and the people around her for their support and revealed that the backing she received has helped her to turn things around and make 2022 a ‘top year’.

"I think, because of the background and the difficulties to be there for the players and the way they have reacted to me, I think this is the top moment in my life for sport," she said.

"Of course it’s the day after and my emotions are still very high but this was a year I just wanted to get over. I just wanted it to be the 31st December and leave it behind me and now it’s made it one of the top years.

"Fighting together against this, because that’s how I felt, fighting together in what I had to go through with the support of people around me in Ireland and then achieving this with each other.

"It’s something so special that will stick with me for the rest of my life." 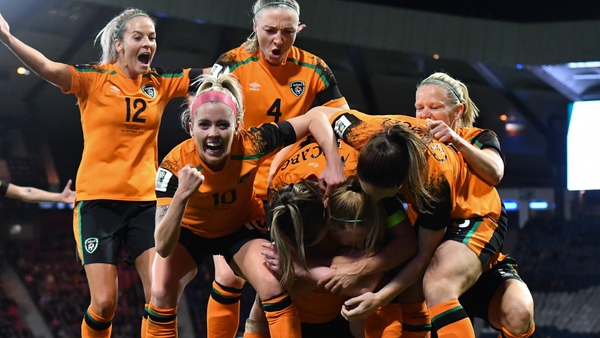