UEFA have confirmed that the Republic of Ireland's original Euro 2024 Group B qualifying fixture schedule will remain as is, with Stephen Kenny's side to face France at home in their opening game.

Shortly after announcing the schedule of games to take place next year, Europe's governing body released a statement to the FAI said, which read: "We have noticed an issue with the calendar and we ask you to disregard the fixture list that was sent out."

However, UEFA have now confirmed that all is in order with the calendar that was published shortly after Sunday's draw in Frankfurt.

And so the French will head to the Aviva on Monday, 27 March. An away assignment against Greece will follow on 16 June, with minnows Gibraltar to visit Dublin three days later.

September will see consecutive heavyweight clashes for the Irish, with France away on 7 September, before a home date with the Netherlands on 10 September.

The France match will likely not take place in Stade de France, as the Rugby World Cup kicks off with France v New Zealand at the same venue on 8 September.

On 13 October, the Greeks will be Dublin ahead of a trip to Gibraltar on 16 October. The campaign finishes away to the Dutch on 18 November.

Speaking to RTÉ Sport as to what lies in store for 2023, Stephen Kenny admitted that the group was as bad as it gets for his side.

"It's as tough a draw as we could have got," said the Dubliner.

"We have shown a capacity in the last year to get results against some big nations like Portugal, Serbia, Belgium and Scotland.

"We are continually looking to improve and it's a big challenge, there’s no doubt about that, but we’re looking forward to the games."

Ireland still have the possibility of qualifying for the Euros via a play-off based on their Nations League ranking. To qualify for a play-off, Ireland will need fewer than three lower ranked teams to qualify automatically.

Follow Scotland v Republic of Ireland via our live blog on RTÉ.ie/sport and the RTÉ News app, watch live on RTÉ2 and the RTÉ Player, or listen to live radio commentary on RTÉ 2fm's Game On. 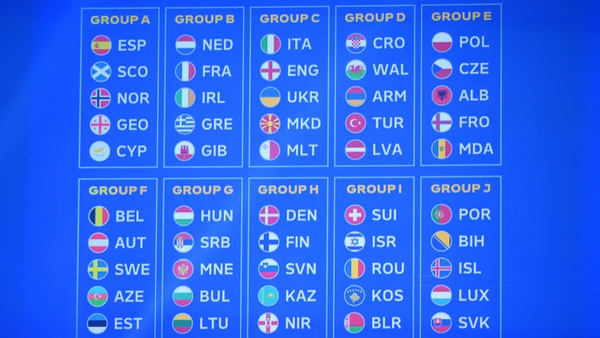