There was a familiar ring to Jen Beattie's words when the Scotland defender said this week: "Being a professional footballer when I was a kid didn't exist."

Many of the Republic of Ireland players who are currently in camp preparing for Tuesday's World Cup play-off have expressed similar sentiments.

Niamh Fahey, Diane Caldwell, Katie McCabe... how can you dream of playing for Liverpool, Manchester United or Arsenal if the possibility doesn't even exist?

Of course, times have changed.

This week's World Cup play-offs now offer these footballers a tantalising glimpse of the grandest of stages; one the Irish players have never experienced before.

As Vera Pauw said last week: "You cannot imagine what [World Cup qualification] will do. It will bring in sponsors, people who want to work harder, facilities and leagues. The whole game will explode."

Ireland will gather in front of a big screen on Thursday night to watch Scotland take on Austria at Hampden Park [7.35pm kick-off] in round one of the play-offs, knowing they will travel to face the winners on Tuesday.

Pauw won't be drawn on who she'd prefer but a reunion with Scotland would be emotional - she managed them for six years from 1998 to 2004.

Pedro Martinez Losa's are in good recent form having swept past Ukraine 4-0 and the Faroe Islands 6-0 in their last two qualifiers, with a 2-1 friendly defeat to the Netherlands sandwiched in between.

Having featured at Euro 2017 and the 2019 World Cup, Murray wants another taste of the big time.

"I think it just makes you all the more determined to get back there," she said.

"It's a game of football and we’ve being doing that all our lives. There are potentially two games between us and a World Cup. This is what it’s all about."

Manager Pedro Martinez Losa encouraged his players to write letters to their younger selves ahead of the Austria game to motivate and focus his charges on the bigger picture.

In her letter, captain Rachel Corsie wrote: "I'm telling you to dream it. It seems impossible and your realistic nature wants to avoid dreaming into what will feel like only a fantasy, but just let yourself imagine. Be brave, be relentless and give your absolute all."

Scotland would be formidable, passionate opponents for Ireland and though they're three places lower than Austria in the world rankings, they have won every previous meeting between the countries. The two sides last met in 2017 at the Cyprus Cup.

Still, Losa will be taking nothing for granted against an Austrian outfit that impressed at the summer's Euros. They reached the quarter-finals before losing - pretty unfortunately - to eventual finalists Germany.

Austria hit the woodwork three times in that 2-0 defeat, with the killer second goal coming right at the death when keeper Manuela Zinsberger's attempted clearances cannoned off Alexandra Popp ad flew into the net.

Very well organised and technically strong, they also boast some top players. Sarah Zadrazil of Bayern Munich is a wonderfully progressive midfielder capable of surging through the lines, while Nicole Billa is a clinical attacker who can turn any game on its head.

Scotland suffered an 8-0 hammering away to Spain in qualifying but that looks a bit of anomaly now; they've certainly recovered well from it.

Erin Cuthbert of Chelsea and Real Madrid’s Caroline Weir sprinkle a bit of stardust on their XI. They are players the Irish camp will be extremely familiar with.

Pauw has previously said "Austria's strength is their organisation" while describing the Scots as "more dynamic, faster in their play". It's a clash of styles but both will provide the Irish with a massive challenge.

All that's left to do now is tune in, put the feet up and wait to see just who stands in Ireland's way as the World Cup odyssey heads for its climax. 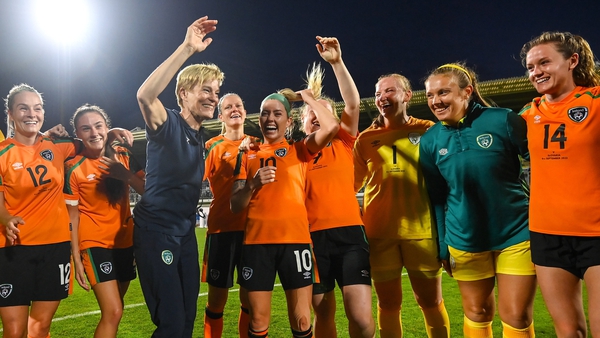