Shamrock Rovers travel to Norway for round three of their Europa Conference League group stage to face Molde at the Aker Stadium, kick-off 5:45pm.

The Hoops will be looking for a positive result against the Norwegian league leaders as they attempt to remain in contention to qualify for the knock-out stages of the competition.

After a hard-fought scoreless draw in their opener against Djurgardens at Tallaght Stadium, Rovers then found themselves with a mountain to climb in their second outing away at Belgian side Gent, as Stephen Bradley's side conceded two early goals at the Ghelamco Arena.

A valiant attempt at times to play their way back into that encounter, however, the slow start once again proved Rovers' Achilles heel - they were two down inside 18 minutes - and the Dublin club eventually conceded once more with the tie finishing 3-0 to Gent.

Early encounters would suggest that Rovers are, perhaps, just that one step behind the group’s other sides and while qualification remains a possibility, it is probably looking less likely approaching the half-way point of the group stages.

Confidence and belief, however, are not lacking in this Rovers team, who are the current back-to-back League of Ireland champions, and they will take heart from many aspects of this year’s extended European adventure heading into tonight’s fjord-side fixture. 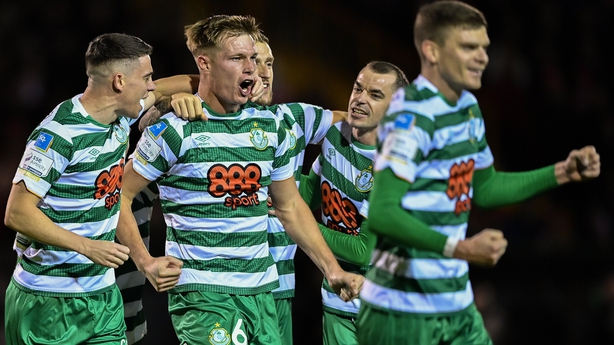 However, a complete performance is needed in Norway for Bradley’s side to move into the upcoming home matches in the reverse fixture with Molde and their Belgian conquerors, and the manager will point to the home team’s European form to suggest that there is something to play for tonight.

Like Rovers, the Norwegian outfit have just one point from their opening two games, and while they earned a credible draw at home to Gent, they were beaten in Stockholm, conceding three goals in the process.

They did, however, manage to score twice in that away fixture, and having fought back from 2-1 down, playing with ten men for the last 35 minutes, they were cruelly denied a point in injury time.

Rovers, of course, have more important matters to contend with on the home front, as they look to make it three in a row heading into the final five games of the SSE Airtricity League campaign.

Many thought the Hoops would have the league wrapped up by this stage allowing them to fully concentrate on their European exploits, however, Derry City failed to read that particular script and are keeping the Tallaght Stadium side on their toes for the final stretch.

As a result, the Rovers team are actually benefitting from the challenge and displayed one of their best performances of the season at the weekend, going to Sligo and winning 3-1 with a quality performance.

The team that lined out in Sligo was also packed full of creativity and attacking intent and it should signal the side’s approach to the game against Molde tonight.

Andy Lyons, Neil Faruggia and Aaron Greene will all be looking to come back in and start tonight’s fixture, while Rovers are also buoyed by the recent return of the influential Roberto Lopes, who gives the manager options in defence.

Sean Gannon is unavailable and Chris McCann is a doubt, however Bradley has a strong squad at his disposal and will be anxious to see his side start on the front foot to set the tone early, while preventing those early scares that have become all-too common throughout the European games.

Tonight’s game would not be classed in the "nothing to lose" category, however, Rovers do need to play with that freedom and confidence, as when those attributes are in abundance the team have shown to be at their best, and can compete at this level of competition.

The Hoops faithful have been waiting patiently to see the best of Jack Byrne this season, and his showing on Sunday in Sligo would suggest that he is almost back to his brilliant best, which could prove crucial to make a mark in this European campaign.

The hosts, however, are a very difficult prospect and with their own league title all but wrapped up, they will be anxious to kick-start their European ambitions with a dominant display against the Dubliners.

Molde currently sit 15 points clear of Bodoe/Glimt – the team who sit atop Arsenal’s group in the Europa League – in the table, courtesy of eleven straight victories in their procession to the title.

Norwegian international, Ola Brynhildsen, is also in a rich vein of goalscoring form, hitting the back of the net in his last five league games, while captain Magnus Wolff Eikrem looks set to influence proceedings.

Emil Breivik and experienced wing-back Martin Linnes are certainly players to look out for in tonight’s game, however, on a positive note for the travelling Hoops, top scorer David Datro Fofana will miss the game due to suspension, having picked up a red card in the 3-2 defeat to Djurgardens.

One game at a time will be the motto for Rovers, while mindful of the fact that there is a vital RTÉ televised clash with Shelbourne following closely behind tonight's game on Sunday.

The odds are against Rovers to bring anything back from their travels on this occasion, however, momentum has been building again in recent weeks and no doubt, the players will want to prove that they can compete over 90 minutes in one of these vital European games.

Whatever the outcome tonight, Rovers will remain mathematically involved in this group heading into the final three games, but with Djurgardens and Gent going head-to-head in the other game, a positive result for the green and white could conjure real hope to further extend this European season.