Christopher Nkunku opened the scoring from a 27th-minute counter-attack after Celtic lost the ball following a short corner and, with captain Callum McGregor off injured, the visitors could not build on Jota's equaliser.

Leipzig had just had a second goal disallowed following VAR's intervention when goalkeeper Joe Hart presented the home team with the ball to allow Andre Silva to score the first of his two second-half goals.

Cameron Carter-Vickers failed to make the game because of injury but the influential centre-back is likely to return for the reverse fixture next week.

The game started in frantic fashion with both sides having several chances inside the opening 10 minutes. Timo Werner and Nkunku threatened for the hosts while Matt O'Riley, Jota and Reo Hatate saw the sting taken out of shots by blocks at the other end.

Celtic's first reprieve came when Nkunku was denied by a tight offside decision after dinking the ball over Hart.

Leipzig's opener came immediately after a spell of Celtic pressure. Kyogo Furuhashi saw a header well saved before Moritz Jenz shot over from a good chance after Greg Taylor had a shot spilled.

Furuhashi then saw his shot deflected wide after being gifted possession on the edge of the box.

The ball was in Celtic's net 16 seconds after the resulting corner. McGregor took a heavy touch 25 yards out and lost the ball in a challenge before inadvertently diverting it into Nkunku's path as he tracked back.

The France international took the ball round Hart and squeezed the ball in between the near post and the sliding Josip Juranovic.

There was a double whammy as McGregor struggled with a knock from the initial tackle and eventually went off. Recent signing Oliver Abildgaard came on days after making his debut as an 89th-minute substitute against Motherwell.

Furuhashi came close with a header but Celtic struggled in the closing stages of the half with Hart making a save and Taylor putting in a good block.

The visitors regrouped at half-time and levelled within two minutes after Hatate received a loose pass and instantly played it forward to Furuhashi. The striker squared to Jota who slotted home with his left foot.

Celtic could not build on the equaliser though. Dominik Szoboszlai hit the post after a one-two with Nkunku and then saw his celebrations cut short after finding the bottom corner from 25 yards. The goal was disallowed after footage showed that the offside Silva had ducked underneath the strike in the line of Hart's vision.

Celtic conceded less than 60 seconds after the let-off. Hart played a pass straight to Szoboszlai who fed Silva to finish in off the post to restore the German side's lead in the 64th minute.

Ange Postecoglou's side could not recover. Hart saved well from Silva but the Portugal international scored again in the 77th minute when he took a touch and stabbed home from six yards after right-back Mohamed Simakan cushioned a volley into his path following Nkunku's diagonal ball. 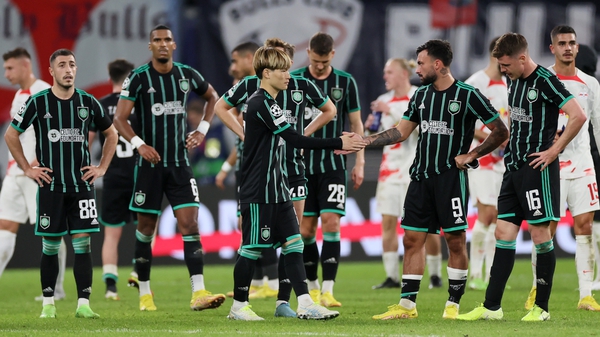