Antonio Conte urged Tottenham to be more clinical after they suffered a frustrating Champions League stalemate in Frankfurt to continue their poor away form in Europe.

Spurs created plenty of opportunities in Germany with Harry Kane and Son Heung-min guilty of failing to make the most of several openings during the Group D tie.

While the Premier League club were able to bounce back after last weekend's humbling loss at rivals Arsenal with a potentially key point, they have now gone seven matches without winning away from home in European competitions.

"The match was a good match," Conte told BT Sport.

"I think we played a match with great intensity. We didn't allow them to play their football and we pressed a lot in every area of the pitch.

"A good draw because it is not easy to play away with this atmosphere, a lot of noise around us and I think my players cope with the situation very well. We played a good game but we know very well if you don't score, you don't win but at least you draw and we got one point today." 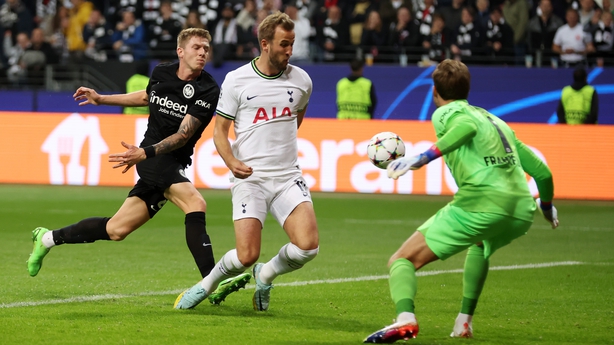 Kane and Son combined on a number of occasions but both were far from their best with the latter overhitting his cross to deny England's captain what appeared a certain opener in the 25th minute.

Spurs forward Kane dragged an effort wide soon after, from a Son pass, before the South Korea international fired off target from a promising position at the end of the first half.

Son curled another effort wide early into the second period and - while Kane finally tested Kevin Trapp with nine minutes left - there would be no late goal at Deutsche Bank Park to leave Group D finely poised with Sporting Lisbon top on six points, Tottenham and Frankfurt in joint-second with four points and Marseille bottom on three points.

Conte added: "For me the most important thing is to create chances to score.

"The game was good for us and we played with a great personality here. Then we will see in one week (what happens) when we have another game against them."