Leicester City manager Brendan Rodgers is hopeful the morale-boosting 4-0 win over Nottingham Forest will be the start of better things to come for the Foxes.

The Foxes hammered their East Midlands rivals, a defeat that sees Forest swap places with Leicester to drop to the bottom of the table, a fifth straight loss their worst run in the league since 2004.

James Maddison ran the show for Leicester in a battle of the league's bottom two teams, scoring either side of a fine strike from Harvey Barnes in a devastating 11-minute spell before teeing up Patson Daka for the fourth in the second half.

"I said this could be a season-changing game for us if we get the result and the performance," Rodgers said.

"It's been too long for how we've been used to working here not to be winning. We've had a tough start with games on the back of a tough summer but tonight feels like the first game of the season. The performance level was there and now we're going to push on and start climbing the league."

Leicester kept their concentration to the end, with Danny Ward making good saves from Awoniyi and Morgan Gibbs-White in the second half to preserve the clean sheet.

"I think the international break gave us a chance to reset everything," Rodgers added. "We knew we needed to have greater desire, to press the game and to stop goals going in.

"We know we have the football idea that allows us to create opportunities and tonight everything worked really well. Now we need to take that into the weekend game (at Bournemouth)." 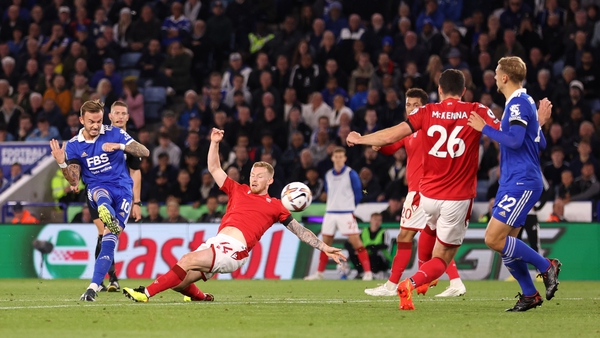