Eoin Doyle proved spot on from 12 yards with a brace of penalties as St Patrick's Athletic came from behind three times to salvage a point in this rollercoaster Dublin derby at Tolka Park.

As well as eight goals, three of them penalties, there were three more disallowed. All mixed in with nine yellow cards and three reds, two from the dugouts.

The battling point edges St Pat’s to within four points of third placed Dundalk whom they meet at Oriel Park on Friday night.

Shelbourne enjoyed plenty of the ball against their suspension-hit visitors early on and were deservedly ahead on 13 minutes.

Scarcely in the game, St Pat’s hit back to equalise on 21 minutes.

All his own work, Barry Cotter collected skipper Joe Redmond’s long ball down the right to cut back across and drill a left-foot shot into the far corner.

If that came out of nothing, Shelbourne regained the lead in similar fashion 10 minutes later.

Scott Matty Smith collected a loose ball, careered forward to drive a shot that beat Rogers at his near post, scoring against the club he was leading scorer for last season.

The visitors thought they had levelled again nine minutes before the break, but Mark Doyle’s header was disallowed for a foul.

But Saints weren’t to be denied as they were on terms again as the watch ticked into added time.

Eoin Doyle’s super header from a Jay McClelland corner was tipped onto the crossbar by Brendan Clarke.

Harry Brockback appeared to get a touch back towards goal with Boyd merely helping the ball into the roof of the net for what may go down as an own goal.

A menace throughout at the other end, Boyd was central to Shels regaining the lead in a rip-roaring game on 52 minutes.

John Ross Wilson went past McClelland too easily on the right to cross where Brockback pulled down Boyd.

The big striker sent Rogers the wrong way from 12 yards for his second goal of the night.

St Pat’s had the ball in the net at the other end minutes later but Eoin Doyle was adjudged offside.

The action kept coming as Boyd was then denied a hat-trick when he thought he’d scored again, but for it to be disallowed for a handball.

Shels did get a fourth goal on 65 minutes to stretch their lead. St Pat’s failed to cut out Wilson’s cross and JJ Lunney curled home from 20 yards.

There was no let up in the action as St. Pat’s got a goal back on 68 minutes, Eoin Doyle slotting home a penalty after Shane Farrell fouled Sam Curtis.

Emotions then boiled over on the sideline as St Pat’s manager Tim Clancy and Shels’ coach Alan Quinn were shown straight red cards for trading insults.

And it wasn’t over yet. Griffin pulled down Eoin Doyle on 78 minutes as Shels conceded a second penalty. Doyle again sending Clarke the wrong way.

With no end to the action, the width of a post then deprived St Pat’s of an 83rd minute winner as Cotter’s free kick cannoned back off an upright. 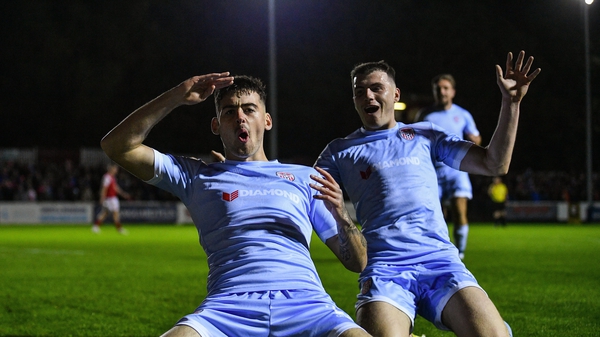