Liverpool defender Virgil van Dijk is confident they can find their best form fast and insists consistency is the key.

A fourth draw in seven Premier League matches left manager Jurgen Klopp admitting confidence is as much of a problem as rhythm and momentum.

Speaking after the 3-3 draw with Brighton, a match in which the Reds came back from 2-0 down to lead, Van Dijk used the word "consistency" in four of his answers to seven questions.

But it will take actions rather than words to turn around a trend which has seen them keep just two clean sheets in 10 matches, with the latest chaotic defensive display clinically exposed by a Seagulls side who had not played for a month and were playing their first match for a new manager.

Liverpool face a crucial two weeks in which they face back-to-back matches with Rangers which will go a long way to deciding their Champions League fate, interspersed with Premier League games against leaders Arsenal and defending champions Manchester City.

Van Dijk is optimistic they will find their feet but after losing more ground in the title race they have to do it soon.

"We've been doing it for four years, five years on a consistent basis and we have to get back to that consistency, all of us. And we have to stick together," he said.

"You have to get in the moment and that consistency is the most difficult part of football.

"You have to do that together, deal with setbacks together and keep doing the same things you want to do.

"It is difficult to react the right way if you are not in the best possible shape, all of us, but I’m confident that we will be.

"Four months ago we were playing for all the titles, now we are not in the best moment – but we will get there."

Liverpool have not become a bad team overnight - in May they were 15 minutes away from winning the Premier League and not that far away in the Champions League final at the end of a season which could have seen them win an unprecedented quadruple.

There is no hangover

That epic 63-match season was fuelled by the momentum of winning game after game and Van Dijk insists there is no hangover from that or the disappointment of coming so close to writing their names into history.

"No, no not at all, there is no hangover from that," he added.

"Teams obviously are getting better, we play in the best league in the world where all the teams are able to compete with each other.

"We have to get back to that consistency and play with joy and freedom but it all starts with doing it together and working hard.

"I keep saying the same things, but we have to find that momentum." 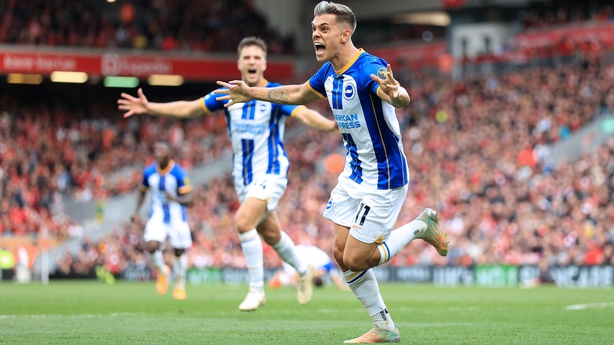 Brighton forward Leandro Trossard (above) became only the third opposition player to score a Premier League hat-trick at Anfield after Coventry's Peter Ndlovu (in 1995) and Arsenal’s Andrey Arshavin (2009).

The Belgium international paid tribute to new head coach Roberto De Zerbi, who was making his Premier League managerial debut after taking over from Graham Potter.

"He tried to work already a lot on the technical stuff. I think we will have some good times with him," Trossard said.

De Zerbi, in turn, thanked Potter, now at Chelsea, for leaving him with a squad capable of playing the way they did at Anfield.

"I believe Graham Potter deserves credit because he has left to me a great deal," he said.

"I have tried not to make any damage but then, of course, if you are asking me when and how I can improve the performances of the team it is to play much more with the ball.

"During the training sessions I am trying to transmit to be intensive on the pitch and also passion – I don’t know if I am good head coach but I know I am a very brave one." 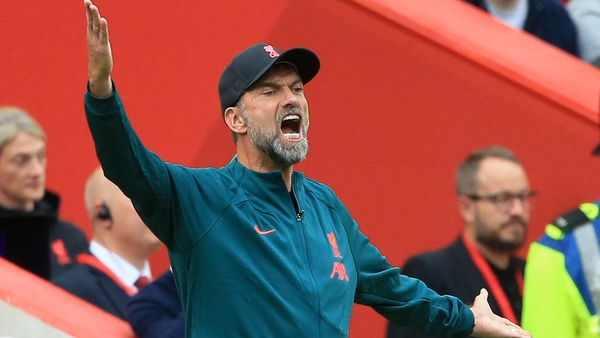