Jeff Hendrick and Robbie Brady have been recalled for Ireland's crucial UEFA Nations League clash against Armenia at the Aviva Stadium, kick-off 7:45pm.

The experienced duo return to the starting XI in place of the suspended Josh Cullen and James McClean, with Hendrick set to sit in midfield, while Brady will start in the left wing-back position.

Jason Knight and Jayson Molumby were picked ahead of Hendrick to start in Scotland on Saturday, but tonight all three will start the relegation battle against Armenia.

Stephen Kenny's side need to secure at least a point from the final match to avoid the dreaded drop to the third tier of the competition and Brady's return is reward for his excellent club form for Preston North End, where he is playing in a similar position.

The aforementioned Knight may be utilised in a more advanced position on the right of a three should the manager opt for a more attacking formation compared to the Hampden Park encounter.

Troy Parrott and Michael Obafemi will once again form the forward partnership in whatever formation is sent out for the final competitive game of 2022.

John Egan will, once again, captain the side in Seamus Coleman's absence from the starting line-up, while Nathan Collins and Dara O'Shea also start in defence.

For Armenina, captain Varazdat Haroyan and Eduard Spertsyan are recalled to the side having missed the Ukraine game through suspension. Jordy Monroy also starts in the only other change to the side that lost 5-0 on Saturday.

Follow the Republic of Ireland v Armenia tonight (kick-off 7.45pm) via our live blog on RTÉ.ie/sport and the RTÉ News app, watch live on RTÉ 2 and the RTÉ Player or listen on RTÉ 2fm. 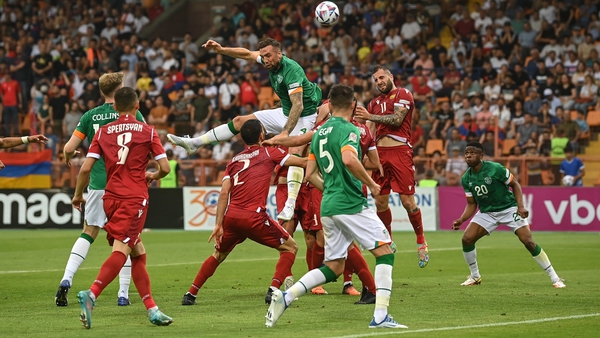 All you need to know: Republic of Ireland v Armenia