England and Germany drew 3-3 at Wembley on Monday as the hosts surged back from 2-0 down to lead 3-2 only for Kai Havertz to level with his second goal as the battle of the Nations League's Group A3 also-rans exploded into a memorable goalfest.

After a first half short on action and quality between the two World Cup-bound rivals Germany gradually took control, going ahead with a 52nd minute penalty by Ilkay Gundogan and a lovely Havertz curler in the 67th.

England hit back with two goals in four minutes as Luke Shaw forced the ball in at the far post after 71 and then Bukayo Saka slalomed past three defenders and fed fellow substitute Mason Mount who brilliantly swept home the equaliser.

Another VAR penalty for a foul on Jude Bellingham enabled Harry Kane to put England ahead but just as the crowd were acclaiming the comeback, goalkeeper Nick Pope spilled a shot by Serge Gnabry and Havertz tapped in the loose ball in the 87th.

Saka then thought he had won it for England, only for Marc-Andre ter Stegen to touch his shot past the post. 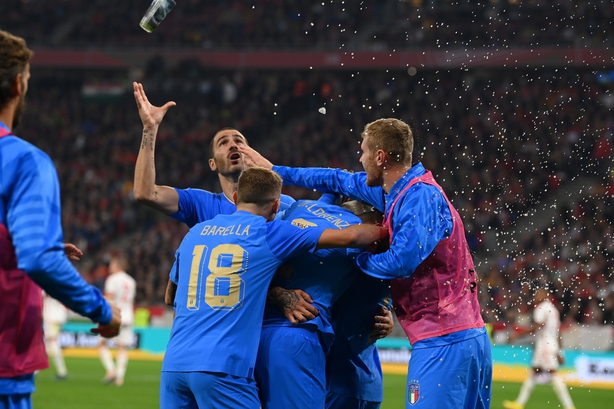 Elsewhere in the group Italy clinched a place in the final four with a 2-0 win away to Hungary thanks to goals by Giacomo Raspadori and Federico Dimarco.

European champions Italy, who missed out on a place at the World Cup in Qatar, finished top on 11 points from six games, one point above second-placed Hungary, who needed to avoid defeat to secure a place in their first Nations League semi-finals.

Raspadori took advantage of a mistake by the defence in the 27th minute to convert a rebound from the edge of the box.

Hungary then had a great chance to equalise just after the break but goalkeeper Gianluigi Donnarumma kept out a flurry of shots by Loic Nego, Callum Styles and captain Adam Szalai.

Midfielder Federico Dimarco made it 2-0 for the visitors in the 52nd minute when he blasted the ball into the roof of the net from close range.

Italy join Croatia and the Netherlands in next year's finals tournament, while Spain and Portugal will play in Braga on Tuesday for the last spot available.