Conor McMenamin has been withdrawn from the Northern Ireland squad for their Nations League fixtures against Kosovo and Greece after an historic video surfaced appearing to show the Glentoran winger allegedly singing a pro-IRA chant.

The decision came a day after Kyle Lafferty was sent home after his club Kilmarnock opened an investigation into a video appearing to show the veteran striker allegedly using sectarian language.

The Irish FA announced the decision to axe McMenamin less than an hour before kick-off in Northern Ireland's match against Kosovo at Windsor Park.

A statement said: "In light of an historic social media video which has been circulated, Northern Ireland senior men's team player Conor McMenamin has been withdrawn from the squad."

McMenamin, 27, has three caps for Northern Ireland, all won in June after an outstanding season with Glentoran was recognised with a first call-up this summer.

On Friday, Lafferty was sent home a day after Kilmarnock announced an investigation into a video which had emerged earlier in the week showing Northern Ireland's second highest goalscorer reacting when a man posing for a photo with him says 'Up the Celts'.

When Lafferty's withdrawal was announced the Irish FA statement also made reference to a back injury which would have ruled him out of Saturday's match regardless.

Manager Ian Baraclough said in a press conference the injury had been a factor in the decision - but there was no such ambiguity in the statement regarding McMenamin.

During Friday's press conference, Baraclough was asked if the controversy regarding Lafferty's video threatened to undermine the cross-community work that the IFA continues to do. Baraclough said he wanted football to remain part of the solution in Northern Ireland.

"For me, we play a part in that by bringing a group of fans together who love supporting Northern Ireland and the football team. If you're winning games of football that makes everybody happy." 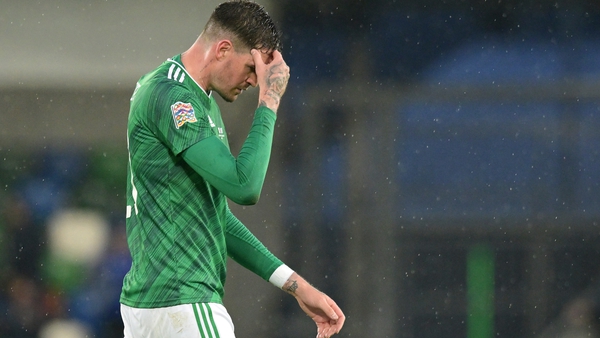