A Maddison Gibson hat-trick created history for Athlone Town as the club now look forward to their first ever EVOKE.ie FAI Cup Final after a 3-0 victory over Wexford Youths.

Gibson set the game alight with a stunning goal inside the opening three minutes for the hosts.

A short corner from Kayleigh Shine to Gibson concluded with the Athlone striker showing impressive control on the edge of the box before shimmying past Nicola Sinnott and launching an unstoppable effort off her left foot into the far corner of the net.

An early blow for the visitors but with plenty of time to regroup and get themselves back on level terms.

Regroup is what they did as they enjoyed plenty of possession after conceding for the remainder of the opening half.

With plenty of experience throughout the side Wexford certainly didn't press the panic button with a relaxed tempo to their play as they tried to eke out a chance or two of their own.

A long distance effort from Becky Watkins on fifteen minutes was the first real chance of note for Wexford but her powerful drive whistled just inches over the bar causing no real concern for Niamh Coombes in the Athlone goal.

Wexford continued to push forward looking comfortable in possession as they showed glimpses of how dangerous they could be on the counter attack.

The warning signs were there for Athlone as Ciara Rossiter began to put the pressure on Athlone and cause problems in attack.

The experienced winger showed great feet out on the left before drilling a ball right across the Athlone box but with no other white jerseys close enough to goal Athlone could clear with ease.

A lapse of concentration from Wexford goalkeeper Maeve Williams on the half hour mark gifted Gibson her second of the game as Athlone took a firm grip of the second semi-final of the day.

Excellent pressure from Gibson forced Sinnott into a long pass back to her goalkeeper but as Williams attempted to chest the ball down to her feet Gibson nicked the ball off her before rounding Sinnott and finishing calmly to the net.

The headlines were already being written for Gibson before she completely stole the show with a goal of the highest quality on the hour mark to cap off a superb performance and ensure she would be taking home the match ball this evening.

The pressure from Scarlett Herron was too much for Rossiter as she showed great spirit in their midfield battle to take possession and set Gibson on her way.

Gibson powered towards goal with the ball stuck to her feet and once within range looped a shot high into the top corner to seal her hat trick.

Kylie Murphy saw a header crash back off the crossbar as time ticked away in the second half but that was the closest her side would come as Athlone Town saw out the remainder of the game and reach their first ever EVOKE.ie FAI Cup Final on 6 November. 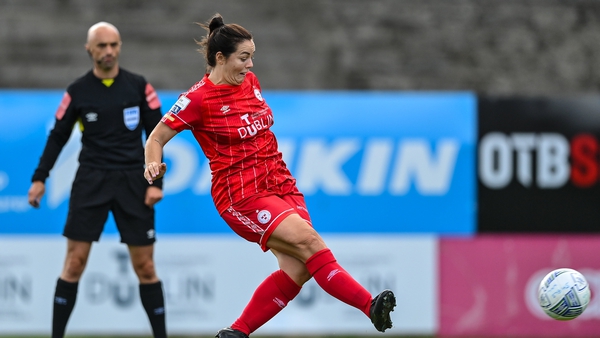 Shelbourne hold off Bohs to return to FAI Cup final