Diogo Dalot found his shooting boots in Prague. A fine run from the in-form AC Milan star Rafael Leao ended up with an assist for Dalot who scored his first international goals at senior level.

Bruno Fernandes scored Portugal's second after a good cross from Mario Rui in added time in the first half before Cristiano Ronaldo handled in his own box to give the Czechs a lifeline.

Patrick Schick missed from the spot, smacking his penalty off the crossbar.

Dalot added his second in the second period thanks to a Fernandes assist.

Liverpool's Diogo Jota added the cherry on the cake thanks to a Ronaldo assist.

Portugal now go two points ahead of their Iberian rivals Spain with both sides meeting each other on Tuesday.

Manchester City's new centre-half Manuel Akanji gave Switzerland the lead in the first half with a header from a Ruben Vargas free kick.

Chicago Fire's Xherdan Shaqiri went on a great run but was denied by a strong Unai Simon forearm in the first half which was played in torrential rain at La Romareda.

Spain started with a Barcelona midfield three of Gavi, Sergio Busquets and Pedri whilst Pablo Sarabia played in the false nine position.

But it was Real Madrid's Marco Asensio who rolled the defender and set up Jordi Alba for the Spanish equaliser.

The Spaniards were only level for three minutes until they were again undone at a corner, this time Akanji was the provider and Breel Embolo the benefactor.

Shon Weismann's second half strike put Israel in the driving seat and extended their lead at the top of their group in Bloomfield Stadium in Tel Aviv.

Gabi Kanichowsky provided the pass for the first Israeli goal.

The win means Israel win the group which is bad news for the Republic of Ireland under-21 side as the players who are eligible such as Liel Abada will drop down for the second leg of the UEFA European under-21 Championship play-off second leg.

Tai Baribo poked home following a scramble in the box to give Israel the win.

Mytro Uzuni had volleyed home the Albanian equaliser two minutes from time, but it was to prove in vain as Albania remain bottom of the three-nation group.

Despite Erling Haaland's 21st international goal in his 22nd international game, he was unable to prevent his Norway side from slipping to defeat away to Slovenia.

Andraz Sporar tapped home from a Benjamin Sesko pass before Sesko himself would go on to score the winner nine minutes from time.

An Alexander Mitrovic hat-trick put Serbia joint top of the group alongside Norway on ten points in Belgrade on Saturday night.

Viktor Claesson had given Sweden the lead after just 15 minutes thanks to a Dejan Kulusevski assist.

Mitrovic equalised three minutes later before adding his second on the stroke of half-time.

The Fulham striker completed his treble three minutes into the second half thanks to a Dusan Vlahovic through ball.

Sasa Lukic added a fourth from range to put the result beyond any doubt.

The win piles the pressure on Northern Ireland who remain bottom of the group despite their earlier win against Kosovo.

Ukraine ran out emphatic winners over Armenia in Yerevan, a result that means Republic of Ireland can't top Group B1 of the Nations League.

An Oleksandr Tymchyk strike had the visitors a goal to the good at the break, but they asserted their superiority in the second period with goals from Oleksandr Zubkov, Danylo Ignatenko and a brace from Artem Dovbyk, adding to their tally.

The Ukrainians now know a win over Scotland at home on Tuesday will see them head the standings and be promoted to Group A for the next Nations League in 2024. 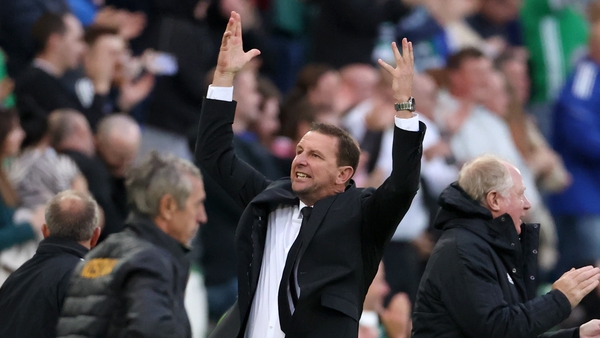