Derry City's Cameron Dummigan believes that his side’s dramatic Extra.ie FAI Cup victory over Shamrock Rovers was just reward for their approach to the game and the way they refused to let set-backs get to them.

The Candystripes dominated much of the match after taking the lead thanks to Jamie McGonigle's header after just 19 minutes.

Things turned even further in Derry’s favour when Lee Grace was shown a red card and the hosts awarded a penalty when Grace brought down Patrick McEleney inside the box.

However Will Patching’s spot-kick crashed back off the woodwork and Rovers levelled things through Rory Gaffney to take the tie into extra-time.

The red card proved to be decisive in extra-time as Rovers tired and goals from Daniel Lafferty and Brandon Kavanagh sealed the victory for Ruaidhri Higgins' men.

Speaking afterwards Dummigan said: "We knew it was going to be a tough game throughout but we just had to stick to what we do best and that’s just to get at them as early as possible and keep on top of them.

Dummigan was unfortunate not to get on the scoresheet as he forced a fine early save from Rovers keeper Leon Pohls and then hit a 25-yard thunderbolt against the post.

The Derry defender admitted to being slightly frustrated by his lack of goals but insisted that all that matters is that his side are through to the semi-final where they will face Treaty United.

"Some nights you just don’t have your luck unfortunately it was one of those nights for me," he said. "But we got the result we want and it’s onto the next round and that’s all matters.

"We’ve had many a night where we’ve had loads of chances and just couldn’t find the net.

"After the penalty I though 'oh no, not again’ but thankfully we just dug in deep and got the result wanted.

"Every goal’s a good goal especially in the cup, so that’s all that matters – we’re into the next round now." 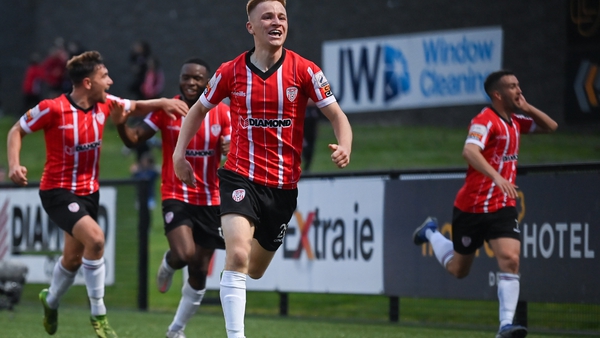