Despite not playing for his club Swansea City since before transfer deadline day, Michael Obafemi is firmly in the plans of Republic of Ireland manager Stephen Kenny.

His club manager Russell Martin has not included him in his squad due to Obafemi not being "in the right frame of mind" to play since being the subject of a bid by Burnley in the final hours of deadline day.

However, he is among the 24 players named by Kenny for Ireland's upcoming UEFA Nations League games with Scotland and Armenia.

Obafemi starred at home to Scotland in the last international window, creating the second goal for Troy Parrott before scoring a spectacular third himself from long range. He subsequently missed the most recent game away to Ukraine through injury.

"I've spoken to Michael and like everything else there are two or three sides to every story. Certainly Michael wants to play football, he wants to play for Swansea," said Kenny.

"Obviously he has been omitted from the last couple of [Swansea] squads after the deadline-day bids and so forth. It’s not ideal, we want our players playing and coming in in good form. It’s just one of those things, I’m sure he’ll be back playing shortly.

"We’re delighted to have him in the squad because we have watched him a few times this season and he has played well, he has been at the level he finished off last season."

Euro 2016 hero Robbie Brady returns to the fold after an encouraging start to his Preston career.

"It's 18 months out of the squad for Robbie. He is one of our better players for sure, all things being equal. But things haven’t been equal for him because his body has let him down, frequently, and that has been most unfortunate," said Kenny.

"It’s just good to see him, he’s only in on absolute merit, we do admire him as a player and the talent he possesses but he’s in because his performances for Preston have been different really for a left wing back.

"He offers you different things, he’s a very creative passer from that position, quality crossing and he just sees things so early and has played well in that position to date this season. I’ve been a few times to see Preston obviously and I’ve enjoyed his performances."

First choice goalkeeper for the last international window Caoimhin Kelleher misses out on the squad due to an unspecified injury.

Kelleher as been at the centre of a dispute between his club Liverpool and his national team as to where the injury was picked up exactly.

"With Caoimhin, if Caoimhin tweaked something in the game against Ukraine it wasn't evident by his performance. He performed very well and done everything really well. I honestly wasn’t aware of him being injured at that time.

"He trained with Liverpool when he went back for pre -season and got injured, but certainly it was something that we weren't aware of it. The good thing is he’s making good progress and is back very soon, and should be back for the next camp for sure.

Asked whether he has spoken to Liverpool manager Jurgen Klopp, Kenny responded:

"I haven't spoken to Jurgen Klopp but the medical teams have been in constant contact so that’s been evident."

Three players have been welcomed back after suffering through injury. The aforementioned Brady, Callum O'Dowda and Andrew Omobamidele.

Omobamidele has excelled since coming back to the Norwich City team which sit second in the English Championship.

"For Andrew it's a different because when you’re a young player and never been injured it’s new, it’s unchartered territory.

"It’s a stress fracture, or potential stress fracture in your back. That creates uncertainty. He had a long period out after bursting on the scene, had a really exceptional start to his international career and only played seven club games when we played him, and he didn’t disappoint. We knew what we were getting and he really excelled."

O'Dowda scored for his new club Cardiff City thanks to a Callum Robinson assist on Tuesday night and has had his own injury struggles.

"Callum is talented, left footed and a direct dribbler. But he has not been able to get a run of games with his previous club Bristol City. He got a really bad hamstring injury and it reoccurred.

"It's been a really difficult period for Callum so he's been through a lot because he's had a few false dawns where it looked like he was getting back and then it went again. Sometimes you get that with explosive players, so he’s been through a lot.

"He's moved to Cardiff and started the season well. He played in four different positions – on the right wing, the left wing, as a left back and wing back.

Republic of Ireland senior squad for Scotland and Armenia 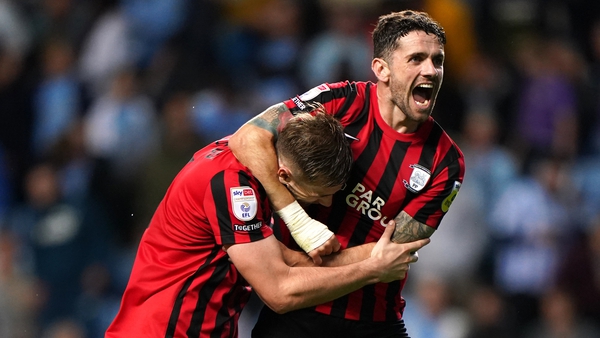