Republic of Ireland international Scott Hogan claimed a hat-trick as Birmingham City secured just their third win of the Championship season with a 3-1 win over West Brom at the Hawthorns.

Hogan put City ahead early in each half sandwiching Jed Wallace's equaliser before adding a classy third to make it successive away wins for City.

Centre-half Dara O'Shea and midfielder Jayson Molumby both started for the hosts and Molumby was central to their 23rd-minute equaliser, with his neat through ball allowing Wallace to finish.

Molumby was not far away with a dipping, swerving drive that sailed a foot over the bar before Swift's similar effort was palmed upwards by Ruddy.

Blues regained the lead in spectacular style in the 54th minute. Hogan side-footed home his second of the game and fourth of the season, but it owed so much to Bacuna, who started the move by winning the ball from a West Brom corner before taking Troy Deeney's pass and racing clear, prior to supplying the cross.

Hogan completed his hat-trick when he latched on to a superb through ball from Deeney on the left and cut inside before poking the ball through Button's legs at the near post.

Substitute Brandon Thomas-Asante made it 3-2 with a late penalty but Albion could not force a further equaliser as Birmingham made it successive away victories and won at the Hawthorns for the first time since August 2005.

Rotherham matched their best ever start to a second tier campaign following a 3-0 win over Blackpool.

Goals from Chiedozie Ogbene, Wes Harding and Georgie Kelly took the promoted side's tally to 13 points from the opening eight games of the season, equalling the tally they achieved in 1965/66.

They were full value for their victory - their third of the campaign - and on this evidence it looks as if the Millers will finally snap their yo-yo status which has seen them swap between the Championship and League One every season since 2016.

Ogbene profited from a miscued header from team-mate Richard Wood to send a looping header past Daniel Grimshaw and into the far corner.

Jimmy Dunne started at centre-half as QPR returned to winning ways with a 2-0 London derby success away at Millwall.

Chris Willock's stunning turn and finish from outside the box, not long after half-time, broke the deadlock at the Den and put Rangers on course for all three points.

Norwegian skipper Stefan Johansen then made the game safe after firing home following a well-worked quickly-taken corner to send the travelling fans into raptures.

Both sides created plenty of chances in a fiery all-capital affair, but it was clinical finishing that made it a successful trip south of the river for Rangers.

Jeff Hendrick played the full 90 minutes for Reading as the Royals lost their 100% home league record as in a comprehensive 3-0 defeat to Sunderland.

The Black Cats dominated most of the first half without creating too much until Patrick Roberts struck with two goals in as many minutes just before the interval.

Jack Clarke effectively settled the issue in the 69th minute, latching onto a superb Dan Neil cross to slot home.

Reading had won all their previous four league games at the SCL Stadium and had also won four of their past five Sky Bet Championship outings.

Sunderland had collected 11 points from their opening eight fixtures in the second tier.

Andrew Omobamidele was again at the heart of the Norwich City defence as the Canaries made it six league wins on the spin as they saw off Bristol City 3-2 in an entertaining clash at Carrow Road. 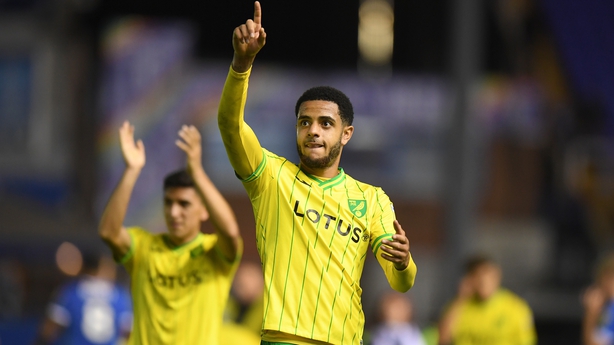 The 20-year-old - pictured above - has played in all nine leagues games this term, where a brace from Teemu Pukki and a sixth of the season from strike partner Josh Sargent set up a hard-fought win for the hosts, who closed the gap on leaders Sheffield United to a single point.

Tommy Conway and Antoine Semenyo scored for the visitors, who battled well after falling 2-0 behind early on.

Meanwhile Coventry came from behind twice to end a run of four straight league defeats with a 2-2 draw against Luton - only their second point of the season.