By Dylan O'Connell at RSC

Cork City are two wins away from the First Division title after an injury-time penalty from Ruairi Keating saw off Waterford at the RSC on Friday evening.

The winning goal cancelled out Raul Uche's 90th-minute equaliser, which looked to have snatched a point for the Blues.

Colin Healy’s team knew about the bigger picture tonight as they pushed up from the whistle and this played to Phoenix Patterson’s strengths. The forward thrived in the space created and he nearly opened up the Rebel Army with a deep cross but this was scrambled clear.

Josh Honohan and the City backline tightened up on the left side to try and counteract this and this left room in the middle for Junior Quitirna to run through into the box.

Just as he got into the box, Matt Healy got in and won the ball back for his side. His side broke from this and Ruairi Keating got into space on the right flank.

His cross to the far post was tipped away by Paul Martin, and the loose ball was drilled goalward by Cian Bargary. The Waterford shot-stopper got low and covered this easily for his side.

The City striker’s defensive attributes were needed seconds later to knock away a Patterson corner that nearly floated straight in at the near post.

There was a lull in the game after the furious start, a period that ended with David Harrington rushing out to knock a ball out of Wassim Aouachria’s path in the 40th minute. This was the start of a strong spell in possession by the Blues, and this ended with Patterson having a long-range shot blocked by Jonas Hakkinen.

This continued at the start of the second half and Quitirna got into an excellent position inside the City box, but the ball was wrestled from his path just as he went to shoot.

Then City won a corner and a short ball was swung in by Healy. This was cleared to Coffey and he curled a shot in towards the bottom right corner of the goal. Martin’s save put the ball into Murphy’s path and the striker bundled it in to give his side the lead.

Two minutes after the restart, Tunmise Sobowale shoved his forearm into the back of Aaron Bolger’s head. Referee Alan Patchell had a good look at this and wasted no time in sending off the midfielder.

The numerical disadvantage seemed to galvanise the Waterford players though and they almost equalised through Roland Idowu, but his driven shot was blocked by Bolger.

The Blues kept the pressure on and forced two corners in the 90th minute. The second ball in from Patterson was met by substitute Raul Uche, who headed in the equaliser for Waterford.

City didn’t give up and they should have scored from a low cross by Murphy but Keating failed to get a touch inside the area.

In the fourth minute of added time, an infringement was spotted by the referee and City were awarded a penalty.

Keating took this and the strike used the inside of the left post to guide the ball in for his team.

STOP what you're doing and watch this... 😱

Meanwhile, in Cobh, Darragh O'Connell's sensational free-kick from just inside the half was enough to give hosts a 31st-minute lead against second-place Galway United.

The bottom side looked set to come away with just a fourth win of the season before Mikie Rowe equalised in injury-time to break their hearts and secure a 1-1 draw.

Treaty United consolidated their hold on fifth place and the final spot in the play-offs with a 2-1 win at home to Bray Wanderers.

Stephen Christopher and Dean George ensured a two-goal lead at the break before Callum Niall Thompson pulled one back in the 78th minute.

Wexford's play-off hopes are hanging by a thread after a 2-0 loss at Athlone.

Adam Lennon and Patrick Hickey scored in the second half to earn the Midlanders a fourth win of the campaign.

Wexford are not nine points behind Treaty United with three games to play. 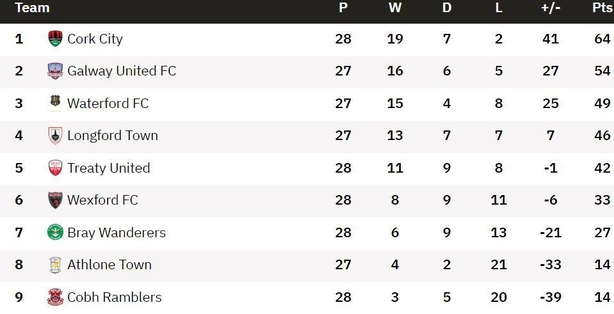