The Hoops had to handle a period of sustained pressure from the visitors early in the first half, with Sean Hoare on hand to clear the ball off the line.

But on balance, one point could easily have been three, as Stephen Bradley's side dominated for large periods of the second half and they will be a touch disappointed not to have broken the deadlock in this entertaining encounter.

It was a mild autumn evening in Dublin as the League of Ireland champions put their title defence on hold to compete in their opening game of the European group stages.

Yet it was the visitors who looked the most composed in the opening exchanges, knocking the ball around, moving at will into the final third, with a couple of shaky moments at the heart of the Rovers defence a slight concern for the home support at a near-capacity Tallaght Stadium.

It took just five minutes for the Swedish outfit to really test the home defence as Hjalmar Ekdal arrived unmarked at the back post to guide a fine downward header back across the face of the goal with Alan Mannus beaten by the bounce. Fortunately for the home side, Sean Hoare was on hand to clear off the line.

It took about eight minutes, but finally Rovers pushed forward, knocking the ball around and young teenage talent Justin Ferizaj the spark as they moved deep inside the Djurgardens' half. A corner would be the best that Rovers could manage, however, cleared at the front post.

Hoare would have to depart in the 11th minute through injury, with the experienced European campaigner Dan Cleary slotting into the heart of the defence.

But after that initial storm, Djurgardens' tempo dropped noticeably as the Hoops moved the play further up the pitch and out of their own half for prolonged periods of possession.

The ever elegant Chris McCann was also starting to influence proceedings, but then in the 21st minute the former Premier League midfielder’s ball out of defence was intercepted, leading to a chance for Hampus Finndell, whose snapshot from the edge of the box tested Mannus, but it was a standard save for the Rovers stopper. 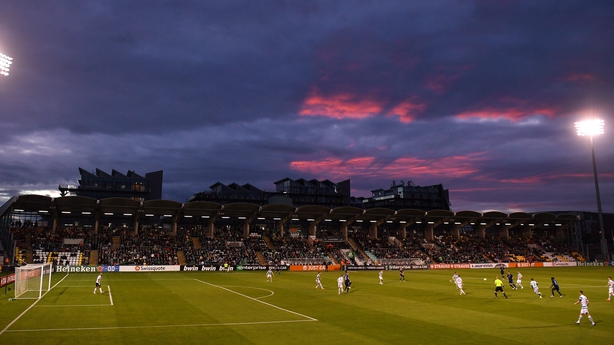 Rovers maintained their attacking intentions and their pressing up the pitch started to make the visitors look ordinary, especially when attempting to work the ball out of their own half.

In the 30th minute a clever Aaron Greene back heel in the Djurgardens box led to a shout for a possible handball but the appeal was not entertained.

Two minutes later, an inviting counter-attack started from a long yet accurate launched ball out of defence by Cleary, finding Finn, with the captain taking the ball in his stride cutting in from the right.

Ferizaj was up in support as Rovers looked to work the ball inside the box, but good defending blocked the attack on the edge of the box as the home side still searched for a meaningful effort on goal.

Rovers then almost gifted the visitors the opener in the 35th minute as Cleary slipped in possession allowing Victor Edvardsen to race clear towards the edge of the box with only Mannus left to beat.

Joel Asoro was up in support, handing the striker options, and perhaps he was caught in two minds as he went for glory but failed to really test the keeper with his long-range effort.

A moment later, Chris McCann made a vital block inside the box with Asoro’s shot travelling at pace, the striker having latched onto a loose ball just outside the area.

It took 38 minutes for Rovers to finally send something goalwards as Dylan Watts found space outside the box, and while his shot had the required venom, the flight was always rising and cleared the bar by a yard or two.

Scoreless as the game moved into the one minute of injury time at the end of the first half, however, the visitors almost got their noses in front as Gustav Wikheim worked a fine header on target, yet Mannus was again up to the task.

Rovers came flying out of the blocks in the second half, and within minutes had Djurgardens on the ropes as Greene burst onto a misjudged Marcus Danielson back pass.

The striker calmly took the ball around the keeper, but credit to Aleksandr Vasyutin, as he stayed big and sent the striker wide, to leave the angle too tight with defenders blocking the route to goal.

Greene then worked the ball back to the arriving Gary O’Neill, who looked to slot the ball into the corner of the net, but again the keeper earned his corn and parried the ball wide of the post.

Ferizaj was next to get involved as his whipped ball across the face, leading to another, and more vocal, handball shout, but a corner was all that was awarded. Andy Lyons connected from the set-piece but the header lacked power and was swept up.

Two minutes later, Watts burst forward into space and opted to shoot early, but again the energetic midfielder could not keep his effort below the bar.

It was Djurgardens turn now to weather the storm and they managed to get their game going again eventually, leading to a snap-shot inside the box in the 60th minute, and Edvardsen perhaps should have done better as he turned the ball over the bar.

The game stopped in the 61st minute to allow seven substitutes come on, as the vistors switched four, while Rovers made a triple switch with Jack Byrne, Rory Gaffney and Sean Kavanagh sent into the battle.

And the changes had the desired effect for both sides as a string of chances presented themselves inside the next ten minutes.

First for Rovers, as Gaffney went clear into the box with the keeper backpeddling back into position. The shot from a tight angle was deflected, running loose across the face but cleared

Then in the 67th minute, a rare foray forward for the visitors allowed Edvardson to break down the left, and while he was always drifting away from the goal, a clever flick of the right foot sent the ball angling towards the far top corner, but it flew wide of the post.

Then in the 71st minute, Neil Farugia raced into the box from the right, having just come on for Finn, leading to a game of defensive pinball. It eventually fell at the feel of Watts, but his shot was smothered.

The Stockholm outfit lifted their performance as the game moved inside the final 15 minutes, with both sides sensing that three points were there for the taking, but were unable to capitalise on an intense period of pressure inside the final third.

Another penalty shout in the 86th minute, but this time for the away side, as the Djurgardens vocal support lifted several decibels as Haris Radetinac appeared to be edged out of the way by the retreating Lyons following a clever clipped ball by Wikheim.

Just as the game moved into the five minutes of added injury time, Rovers broke up the field and while they had numbers in attack, Kavanagh opted to test Vasyutin from outside the box.

The shot was flying low into the bottom corner but the keeper was up to the test to keep the game scoreless with both sides now resigned to settling for an opening point in what turned out to be an intriguing European contest. 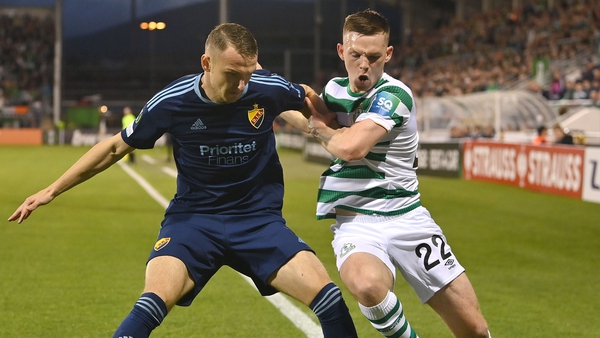