Louise Quinn says complacency will never be an issue for the Republic of Ireland because "there's too much to play for".

Centre-half Quinn has been around the Ireland set-up since 2008. She was in the squad for the Euros play-off against Iceland in 2008, which Ireland lost 4-1 on aggregate. It's taken 14 years but the Girls in Green are back in a play-off again, this time for the World Cup.

Having endured so many lows, Quinn doesn't need anyone to put into perspective the magnitude of the Irish team's rise under Vera Pauw.

They have the chance to make a seismic breakthrough by making the 2023 finals in Australia and New Zealand, but there's work to do.

First, they must beat Slovakia on Tuesday evening to earn a bye to round 2 of October's play-offs. And it wont be easy.

"We're constantly competing and constantly trying to send messages to other teams about the strength and depth of our team.

"We’re thrilled to get in the play-offs but we have another chance to make it even better… get that extra bonus for all the hard work we’ve done and to keep pushing through this group like we always have.

"There's never complacency in the games, there's always so much to play for as a team and personally."

Quinn has been a mainstay of the campaign but her defensive partners have chopped and changed, mainly due to injuries. Savannah McCarthy, Niamh Fahey, Diane Caldwell and Megan Connolly have all had recent stints beside the Birmingham City player at the back, but Quinn says it's not been a big issue.

Ireland have, it should be noted, conceded just four goals in this campaign.

"It's been fairly easy to be honest," Quinn said of the need to adapt to new partners in defence.

"You always have to make a connection when you're coming into camp. We had time in Turkey [at a training camp last June] as well to train together for so long. If you look at the squad I've been playing with so many of them for years, and with some of them at club level as well.

"For me it's no stress. I know the capabilities of the girls."

With a World Cup play-off berth already secured, @Corktod reports from Slovakia as the Republic of Ireland train ahead of Tuesday's final group game with the result set to determine their path. pic.twitter.com/zQ18rEnZQi 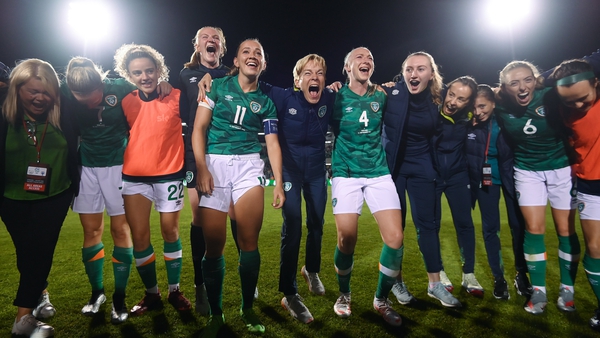 Pieces fall into place for Ireland to chase the dream