Chelsea beat West Ham United 2-1 at Stamford Bridge as goals from substitutes Ben Chilwell and Kai Havertz cancelled out Michail Antonio's opener - but they also had the VAR referee to thank after an apparent Hammers equaliser was ruled out.

The Blues, looking to improve on their stuttering start to the Premier League season, were rocked in the 63rd minute when they failed to clear a corner and Declan Rice squared the ball for Antonio to convert on the goal line.

Thirteen minutes later the hosts were level when Chilwell squeezed between two defenders to get his head on a long forward pass by Thiago Silva and deftly angled the ball between the legs of West Ham goal-keeper Lukasz Fabianski.

Havertz completed the comeback in the 88th minute when he connected with a cross by Chilwell to make it 2-1, moments after West Ham substitute Maxwel Cornet had headed against the post when he should have scored.

In the dying moments, Cornet thought he had levelled it for West Ham but his goal was ruled out after a VAR check ruled that Jarrod Bowen had fouled Chelsea goalkeeper Edouard Mendy. 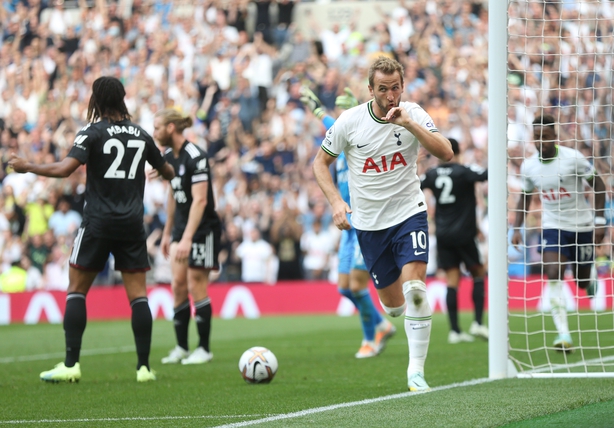 Tottenham Hotspur maintained their impressive start to the season with a 2-1 victory over Fulham that did not do justice to their best attacking display so far.

Goals in each half by Pierre-Emile Hojbjerg and Harry Kane earned Tottenham a fourth win in six games but in-form Aleksandar Mitrovic's effort set up a nervy finale.

For the first time Tottenham manager Antonio Conte unleashed Richarlison from the start to form an attacking trident with Harry Kane and Son Heung-min and it proved an exciting formula.

But after almost constant Tottenham pressure it was midfielder Hojbjerg who finally earned Tottenham the lead they deserved with a neat 40th-minute finish.

Kane made it 2-0 in the 75th minute and the superb Richarlison was denied by the woodwork and had a goal disallowed for offside as he did everything but open his account.

Mitrovic struck a superb reply in the 86th for his sixth league goal of the season but Tottenham sealed the win that put them on 14 points from six matches. Fulham have eight points. 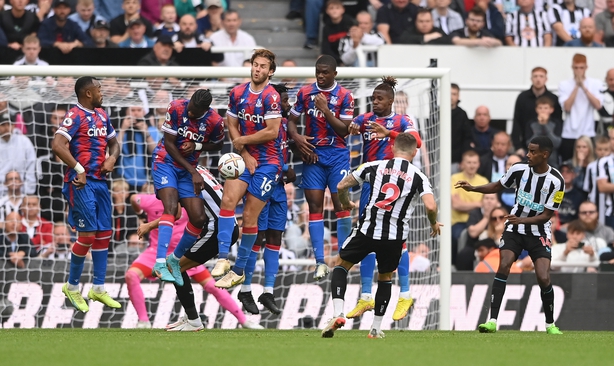 Newcastle United had a second-half goal ruled out after a VAR review as they drew 0-0 with Crystal Palace in a game that was full of chances, but somehow yielded no goals.

After netting against Liverpool in midweek following his arrival from Real Sociedad for a reputed £59m, record signing Alexander Isak came close to scoring in the first half, robbing Joachim Andersen to create a one-on-one but failing to get his chip over Palace keeper Vicente Guaita.

Newcastle's Miguel Almiron went even closer, firing through a thicket of bodies and hitting the base of the post to send his side into the break somehow still level, despite a slew of chances.

The home side thought they had taken the lead six minutes into the second half thanks to an own goal from Tyrick Mitchell, but the decision was overturned after a VAR review found that Joe Willock had fouled Guaita.

Palace created plenty of opportunities of their own but many of them were fired straight at Newcastle keeper Nick Pope, who had little trouble dealing with them.

Despite the two sides racking up 38 shots between them, the game finished scoreless to leave Newcastle in 11th position in the table on seven points, with Palace 15th on six points. 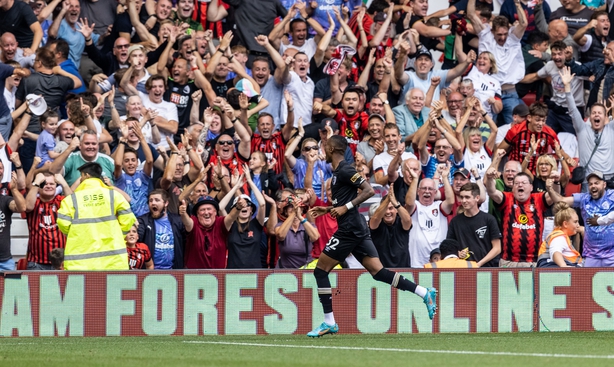 Jaidon Anthony came off the bench to hand Bournemouth a 3-2 win over Nottingham Forest as they bounced back from two goals down in a thrilling clash of the promoted sides.

Cheikhou Kouyate and Brennan Johnson gave Forest a 2-0 lead at half time but Bournemouth produced a terrific performance in the second half, rallying through goals from Philip Billing, Dominic Solanke and Anthony.

With the score 2-2, Anthony scored the winning goal in the 87th minute as he coolly side-footed a finish past Forest goalkeeper Dean Henderson following a pass from Solanke.

Earlier, Senegal midfielder Kouyate put Forest in the lead in the 33rd minute as he rose highest in the box to power home a header from Morgan Gibbs-White's corner kick.

Forest doubled their lead before the break when forward Johnson scored an ice-cool penalty, following a lengthy VAR review after a handball incident by Bournemouth skipper Lloyd Kelly.

Bournemouth responded quickly in the second half, with central midfielder Billing finding the target in the 51st minute with a stunning strike from around 30 yards out.

Forest wasted a chance to add a third goal and it proved costly as striker Solanke made it 2-2 for Bournemouth in the 63rd minute, pulling off a superb acrobatic effort which flew into the net via a slight deflection off Scott McKenna. 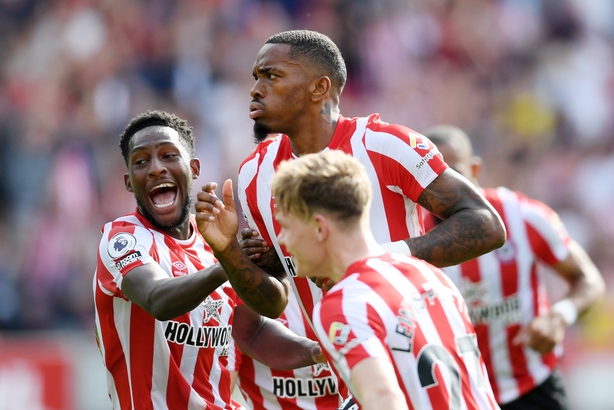 Toney sent Illan Meslier the wrong way from the penalty spot to open the scoring in the 30th minute after being fouled by Luis Sinisterra and doubled Brentford's lead with a sublime freekick from just outside the box in the 43rd.

He completed his sixth career hat-trick in stunning style in the 58th minute, rounding Meslier and floating the ball over two defenders and into an empty net from distance after the Leeds keeper was forced to charge out to clear his lines.

Sinisterra pulled a goal back for Leeds just before halftime with a fine bit of skill, but Leeds then lost their manager Jesse Marsch to a red card for arguing with the officials shortly after Toney's third goal.

Marc Roca scored a second for the visitors in the 79th, but it was Brentford who had the last word when Bryan Mbeumo slotted home a minute later to restore the two-goal cushion before Yoane Wissa added the home side's fifth in injury time.

The win moved Brentford up four places to seventh in the table, while Leeds dropped to ninth. 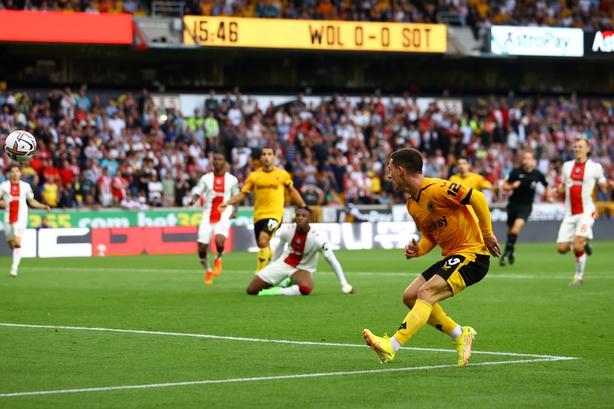 A Daniel Podence goal on the stroke of half-time gave Wolverhampton Wanderers a 1-0 win over Southampton, their first victory of the season.

Matheus Nunes broke down the right and picked Podence out with a low ball to the back post although Saints keeper Gavin Bazunu should have done better to keep out the low drive.

After the break Che Adams had the ball in the net for Southampton but it was ruled out for handball on what was a frustrating day for the forward.

Adams had a Stuart Armstrong cross against the bar as Wolves held on for a win that moves them up to 14th on six points.

Southampton fall to 12th place with seven points from their opening six games.