Erik ten Hag was tight-lipped about the impending arrival of Antony but the Manchester United manager admitted his satisfaction at bolstering his attacking options, while suggesting Cristiano Ronaldo would not be departing Old Trafford.

A deal is in place for United to sign the Brazilian forward from Ajax in a transfer worth a fixed fee of £80.6million, with a further £4.2m in add-ons, agreed between the two clubs.

The deal is dependent on a medical, player terms being finalised and international clearance and Ten Hag is hopeful the 22-year-old will be available for this weekend's clash against Arsenal.

Speaking before his side’s trip to Leicester on Thursday, Ten Hag said: "Firstly I have to sign him! There’s an agreement between the clubs but the paperwork is not done so I cannot go too deep into that."

Ten Hag, who confirmed the possible signings of Antony and Newcastle goalkeeper Martin Dubravka will be their only incomings before the transfer window shuts on Thursday evening, added: "Offense department we need to strengthen our squad.

"We have many games to cover – from now on we go in three games a week. Especially from offensive players, they are quicker fatigued because they have to run more and run with higher intensity. We need numbers there, we need not just quantity but quality."

Ten Hag insisted Ronaldo remains part of his plans, saying when directly asked about the Portuguese: "It’s clear, of course. We need quality players. You need more and to cover all the games to keep the consistency going, that’s what we strive for."

United lost their opening two fixtures of the season but responded with a win over rivals Liverpool before edging out Southampton last week.

Ten Hag, who confirmed Aaron Wan-Bissaka would remain at the club amid reported interest in barcelona full-back Sergino Dest, added: "I see it as a start, we now have a good base. This is the minimum we have to bring.

"I was happy to see the turn and we have to keep the spirit and keep this winning mentality because you need it if you want to have a successful season." 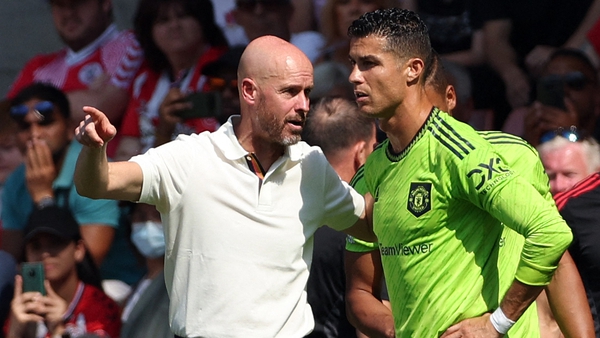