St Patrick's Athletic inflicted a painful home defeat on Dublin rivals Bohemians in a result that is likely to be crucial when European qualification is decided at the end of the season.

Goals from Barry Cotter and Chris Forrester gave the Saints a 2-0 lead at half-time, before Adam O’Reilly’s late strike ensured that Rory Feely’s header was nothing more than a second-half consolation.

The win leaves St Patrick’s Athletic within touching distance of the European qualification spots, while Bohemians linger a further 12 points behind the Inchicore side.

And the frustration around Dalymount was tangible as a crescendo of boos rang out at full-time.

A lively evening started on a sombre note, as the home fans unveiled a poignant banner in tribute to legendary club volunteer Derek Monaghan, who passed away earlier this month.

He was a stalwart at this ground, and the setting couldn’t be better for a game of football in his honour as a wispy sky glossed over the famous Phibsborough turf.

With a goal in each of his last two league games, St Patrick’s winger Serge Atakayi looked full of confidence charging down the right-hand side early on.

And the Finnish national created the game’s opening chance when he beat his marker to drill a low cross into the box. However, Eoin Doyle’s shot flew just wide of the post.

It’s not typical for a Shamrock Rovers player to become a Saints fan favourite, but that is certainly the case with the on-loan Cotter, who converted a magnificent solo effort to open the scoring. 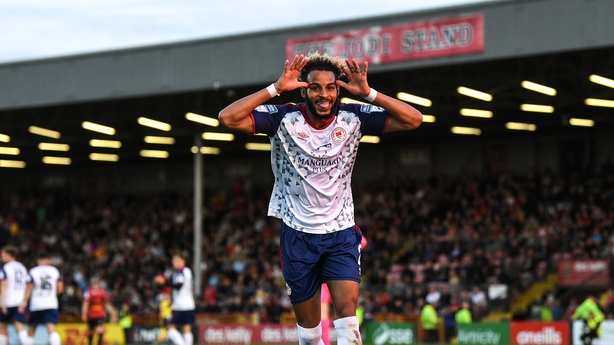 The right wing-back collected a one-two from Forrester on half-way, jinked past three tackles and smashed a deflected effort in from just inside the box.

Regardless of whether he returns to Shamrock Rovers next season, one thinks he’ll remember his first St Patrick’s goal for a long, long time.

Riled up by their early concession, Bohs responded urgently.

However, the St Patrick’s back five – led by the ever-impressive Joe Redmond – ensured their first-half goal never came.

And that defensive work paid off when the Saints doubled their lead on the stroke of half-time.

Josh Kerr’s loose defensive header was pounced on by Atakayi, who charged into the box before laying it off to Forrester to finish.

Keith Long made three changes early in the second half as Jordan Doherty, Ali Coote and James Clarke were all introduced to get the home side back into contention.

And it was Coote who had the instant impact when his corner was fired home by centre-back Feely.

Bohs were soon in control, exacting increasing pressure on the St Patrick’s midfield and defence – O’Reilly picking up a yellow card in his bid to keep the home side at bay.

Bohs’ tenacity set the stage for a nervy ending, but the Saints' anxiety was finally quelled when substitute O’Reilly ran through to convert an 89th minute counter attack.