Three rescheduled games in the SSE Airtricity Premier Division are down for decision this evening as second-place Dundalk head to Sligo, while Shelbourne welcome Derry City to Tolka Park and Bohemians and St Pat's meet in a Dublin derby.

As things stand, Shamrock Rovers have a seven-point lead at the summit and have a game in hand on Dundalk. That said, Stephen O'Donnell's Lilywhites will be keen to put points on the board and keep the Hoops honest. They head to The Showgrounds on the back of a 3-0 loss to the Hoops, a game where their high line was exposed time and again by the opposition, who never really had to get out of second gear.

O'Donnell’s side dominated possession on the night and had chances of their own but the concession of three almost identical goals on the break meant that they never really threatened an upset.

For Sligo, reaching the third qualifying round of the Europa Conference League was a high point in the season so far, but their league form has been patchy to say the least. Successive defeats to St Pat's and Finn Harps has further eroded hope that they'll be embarking on another European journey in 2023. A return to winning ways, therefore, is required for the Bit O' Red.

The winning thread is also what Derry City will be after as they strive for another go at the Conference League next season. Three successive league draws have ended any slight hope that they could challenge for the title.

Nailing down that European spot and going deep in the FAI Cup are the obvious targets for the rest of the season. Shelbourne's top-four hopes all but ended after drawing with Bohemians, but they have a game in hand on those just above them in the table and will feel a top-half finish is not beyond them.

Successive league wins for St Pat's after the frustration of losing to CSKA Sofia in the Conference League was just the response Tim Clancy wanted. Pat's now head to Dalymount to face a side who again let a lead slip when taking only a point against Shels dthe last day. 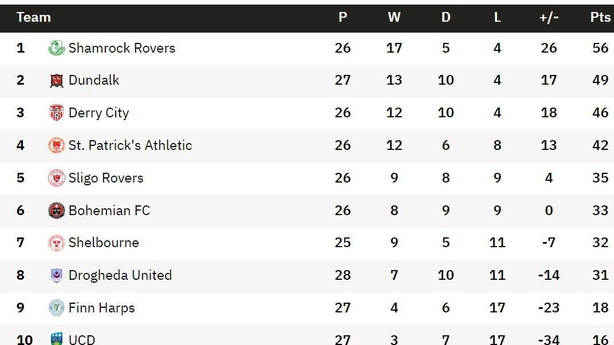 It's ten days since Sligo last played, plenty of time to re-focus on getting their campaign back on track, a point emphasised by manager John Russell.

''We have had a chance to regroup after the result last week and we’re now ready for what will be a massive game," he said.

''Dundalk have a lot of quality in their team and have had a good season up to this point so we know it’ll be a difficult game.

‘"We haven’t beaten Dundalk this year so the players are eager to get back out in front of our home support and put on a good performance.

’’In teams news, Garry Buckley (knee) and Seamas Keogh (quad) are out with long-term injuries."

Colm Horgan is getting closer to a return and could be back in the Bit O’ Red squad. There are no other suspension or injury concerns for the manager.

Ex Rovers defender Robbie McCourt is expected to be involved for the visitors on his first return to The Showgrounds following his July transfer.

Derry could replace Dundalk in second place if they win in Dublin tonight.

But manager Ruaidhri Higgins admits that the Drumcondra venue has always been a difficult place for them to get a result and Shels haven't lost in their last eight league games.

"There has been plenty of history between these clubs down through the years and any win at Tolka was always hard earned," he said.

"They have a very good manager in Damien Duff and they'll be very well organised. It'll be a tough game, no doubt."

Higgins will have to do without the suspended Mark Connolly but he was hopeful everyone else would be available.