They went close to backing up their shock first-round win over Sligo by taking Dundalk to extra-time at Ferrycarrig Park, before Robbie Benson’s penalty eventually settled the tie.

Speaking to RTÉ Radio’1s Saturday Sport before the game, club secretary/treasurer Ray Noonan told Adrian Eames of the difficulties of keeping a 100% fan-owned club on the road.

"Everybody involved in League of Ireland clubs would know, this is not a commercial enterprise, it's a hard battle just to make ends meet, develop our facilities and try to invest in the squad," he said.

"We have about 60 members at the moment. We're trying to promote it throughout Wexford, we want more people to get involved. We want to become a true community club.

"We have a new chief executive, Tony Doyle, a businessman from Enniscorthy who has sold his own business and is looking forward to the project. He’s very energetic and highly motivated and he’s getting stuff done already.

"We’re a small club, we’re part-time, but we’re holding on our own on the pitch this year and we’re hoping to push on."

Listen to the full segment:

Winning promotion is the dream but Noonan admits that is a tough task against better-resourced opponents.

"We won the First Division in 2015 and it's hard to see a part-time club doing that any time soon again," he said.

"You've got full-time teams like Waterford, Cork, Galway training every day of the week while our lads are working or they are students.

"It is a tough battle but we hold our own. We have a young manager [Ian Ryan] who is very progressive and a strong squad, which we are showing now on the field, which is great.

"There’s more money coming into the league of late, you can see it in the strength of teams and the fellas coming back from England.

"The Premier clubs are doing well in Europe. It’s very positive for the league and we’re trying to make sure we stake our claim here and build on what we have.

"Hopefully we’ll be competitive with all the rest of clubs in years to come."

"Tonight [Friday] shows you the potential of the club as an overall structure, the fans that were here, how the pitch looks and the brilliant group of players we have, which is the most important thing," he said.

"They are young, hungry and ambitious and we want to get into the Premier as quick as we can." 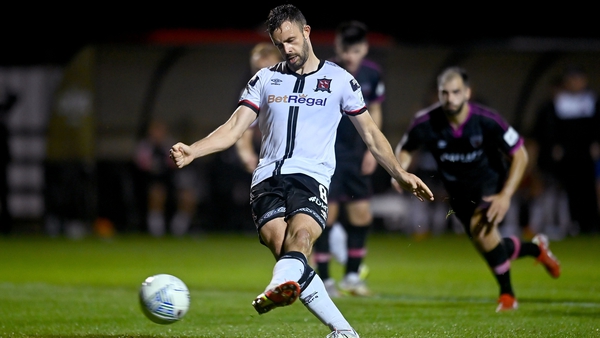