Forest did not provide details but British media reported they would pay an initial £25m (€29.5m) for the 22-year-old, who has represented England from the Under-16 to Under-21 levels.

The deal for Gibbs-White, who will wear the number 10 jersey, could rise to £42.5m (€50m) when add-ons are included, reports added.

Forest have been busy during the summer transfer window ahead of the Sept. 1 deadline, bringing in 16 players including Jesse Lingard after his departure from Manchester United and Neco Williams from Liverpool.

Steve Cooper's side lost 2-0 at Newcastle United in their league opener before beating West Ham United 1-0 last weekend. They travel to Everton on Saturday.

Chelsea have completed the £12m (€14.1m) signing of Cesare Casadei from Inter Milan.

The Blues have added the highly-rated 19-year-old midfielder to their ranks, continuing the new owners' drive to recruit the game's brightest young stars.

And Boehly and Eghbali will continue to push for deals for Pierre-Emerick Aubameyang, Wesley Fofana, Anthony Gordon and Frenkie De Jong.

Chelsea view Italy youth international Casadei as a player of high promise who is already part way through the process of bridging the gap between academy and first team. 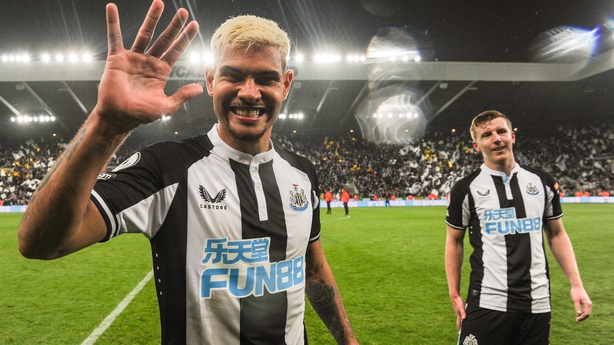 Newcastle boss Eddie Howe has told Real Madrid to forget about trying to lure Bruno Guimaraes away from Tyneside amid speculation he is in their sights.

The 24-year-old Brazilian, a £35m (€41m) January signing from Lyon, has been a major hit in the Premier League, but has been touted in both Spain and his native country as a replacement for Casemiro should he head for Manchester United.

Asked if he could contemplate selling Guimaraes, Magpies head coach Howe said: "No, absolutely not.

"We're trying to build a squad here that we feel can take the club to be successful over the next few years, and we want to build that squad and enhance the group, not take away our best players."

Tottenham Hotspur midfielder Tanguy Ndombele has joined Serie A club Napoli on loan for the season, with an option to make the transfer permanent.

Ndombele, 25, joined the north London club from Ligue 1 side Olympique Lyonnais in July 2019.

The France international played 18 times in all competitions for Spurs last season, spending the second half of the last term on loan at Lyon.

Meanwhile Manchester City boss Pep Guardiola does not expect his side to do any more business in the transfer window.

City made Sergio Gomez their fifth signing of the summer earlier this week, following Julian Alvarez, Erling Haaland, Kalvin Phillips and Stefan Ortega to the Etihad Stadium, but Guardiola has been told that is it.

Asked if their business was done, he said: "Apparently yes, but if there is a problem that we don't expect maybe..."