The City Ground had not hosted a top-flight match since 1999 and Taiwo Awoniyi ensured it was a winning homecoming for Forest with his first-half goal.

The striker, who until Saturday night was the club's record signing this summer, bundled home from close range to become the first Forest player to score a Premier League goal since Chris Bart-Williams all those years ago.

It got them up and running after defeat at Newcastle on the opening weekend and, on this evidence, Steve Cooper’s men are going to be a welcome addition to the top flight.

However, they did have goalkeeper Dean Henderson to thank for keeping the three points as he saved Declan Rice’s second-half penalty.

He also made several other saves while Pablo Fornals and Said Benrahma both hit the underside of the crossbar for the luckless Hammers, with the latter also seeing an opening goal ruled out by VAR in the first half.

Boss David Moyes will be left scratching his head as to how his side were on the losing side, but with two defeats from two, the Hammers will need to kickstart their season soon.

Forest fans had waited 8,492 days to sing their famous anthem 'Mull of Kintyre' ahead of a Premier League match and they put in a performance worthy of the wait, producing a spine-tingling atmosphere.

And their side fed off that as they made an electric start in the opening 15 minutes, playing with high intensity and surging forward at speed.

West Ham goalkeeper Lukasz Fabianski had to be alert to tip over Vladimir Coufal’s clearance that went wrong before Awoniyi flashed a header just wide from a fine Neco Williams cross.

The Hammers were in danger of being overran, but were able to get a foothold in the game and thought they had taken the lead in the 42nd minute, only for VAR to intervene.

Breaking quickly from a Forest set-piece, Rice slipped in Benrahma and he slotted home into the bottom corner. 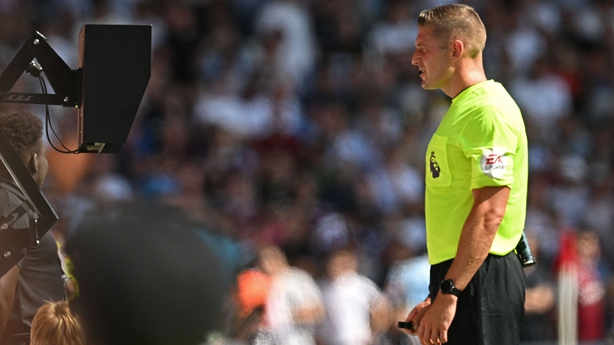 But Forest felt Orel Mangala was impeded in the build-up as did VAR official Michael Salisbury and then, after viewing the pitchside monitor, referee Robert Jones agreed and the goal was chalked off.

There was nothing picturebook about it as it was a scrappy mess, but having had to wait so long for this moment, no one dressed in red cared.

Harry Toffolo surged into the area and cut back perfectly to Jesse Lingard, who looked destined to score against his old club, but he scuffed his shot.

Luckily Ben Johnson diverted it on to the knee of Awoniyi and the ball ended up in the bottom corner.

West Ham were millimetres from levelling within 25 seconds of the restart as Fornals sent a curling 20-yard effort crashing into the underside of the crossbar, with Tomas Soucek seeing his header from the rebound saved by Henderson.

But Forest rediscovered their verve and soon suffered their own VAR misfortune as they had a goal disallowed.

Mangala barged through and played in Brennan Johnson to poke home, but from an offside position.

It was 100mph stuff and West Ham were again a lick of paint from an equaliser as Benrahma was denied by the woodwork, when his 20-yard free-kick hit the underside of the crossbar and into the grateful hands of Henderson.

West Ham thought their moment had finally come midway through the second half as they were awarded a penalty.

Having broken at speed, Soucek’s goalbound shot hit the arm of Scott McKenna and after another lengthy check at the monitor Jones pointed to the spot.

However, Henderson, who is notoriously good at saving penalties, got down low to keep out Rice’s effort.

Forest then needed Williams to clear Kurt Zouma’s header off the line as West Ham pushed for a leveller, but nothing was going to stop this being Forest’s day.