Shelbourne maintained their grip on the summit of the Women's National League after a 4-0 win over Treaty United.

The defending champions had beaten rivals Peamount United in the FAI Cup last week but their previous league fixture had seen them fall to a 3-2 defeat at WNL debutants Sligo Rovers.

But any nerves were eased early as Alex Kavanagh opened the scoring via a fifth-minute free-kick against the division's bottom side.

Emma Starr and Jemma Quinn's goals then had them three goals to the good by the quarter-hour mark.

Megan Smyth-Lynch added a fourth for Shels seven minutes from time in a result that keeps them five points clear of second-placed Wexford Youths who needed a 90th-minute winner from Aoibheann Clancy to edge to a 1-0 win at Galway. 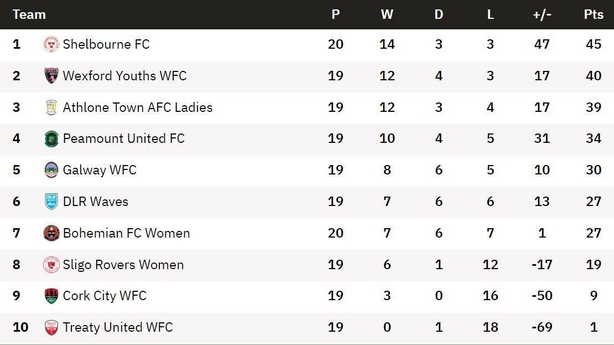 As a tightly-fought encounter reached its conclusion, Ellen Molloy was fouled in the box, with Clancy converting from the penalty spot to keep her side's title hopes alive.

Athlone Town have been having an excellent season and continued in that vein with a 2-1 win at second-from-bottom Cork City that keeps them in touch with Wexford.

Maddison Gibson's brace made the difference for the visitors, scoring in each half, either side of a Christina Dring goal for Cork. The Midlanders stay third, six points off the top.

Peamount United needed an 89th-minute equaliser from Republic of Ireland international Áine O'Gorman to earn a 1-1 draw at DLR Waves who had led through Kate Mooney's opener on 62 minutes.

The 2020 double winners remain five points adrift of Athlone and 11 off a Shelbourne side that pipped them to the title on the final day last season.

Elsewhere, Niamh Prior opened the scoring in the first minute as Bohemians defeated Sligo Rovers 2-0 with Abbie Brophy making sure of the win with six minutes to go. 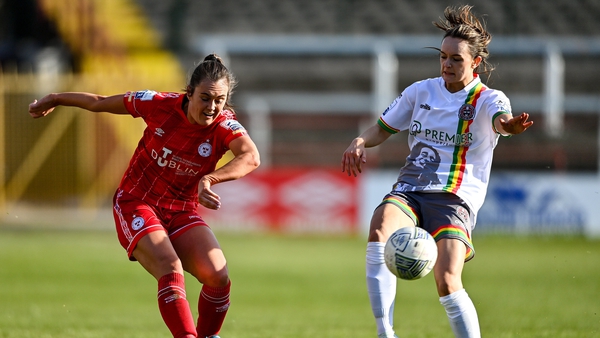