The top two in the SSE Airtricity League First Division both suffered defeats on Friday.

Cork City, who came into the game top of the second tier, lost 2-0 against Treaty United at Turner's Cross.

Ben O'Riordan put the visitors in front on 11 minutes before the Limerick side doubled that advantage six minutes after the break through Mark Ludden to claim all three points and stay in the final promotion play-off place.

However, Cork remain three points clear in the automatic promotion place with a game in hand, after promotion rivals Galway United also fell to a defeat at third-placed Waterford.

Stephen Walsh had given John Caulfield's side the lead in the 12th minute as they looked to close the gap at the top but Waterford responded shortly after thanks to a Roland Idowu leveller.

Galway were down to ten men in the 65th minute when Conor McCormack was sent off but Waterford's Phoenix Patterson missed the resulting penalty.

However, Waterford eventually made the most of the numerical advantage with Junior Quitirna's winner giving the hosts a 2-1 win and bringing them within six points of their visitors with a game in hand. 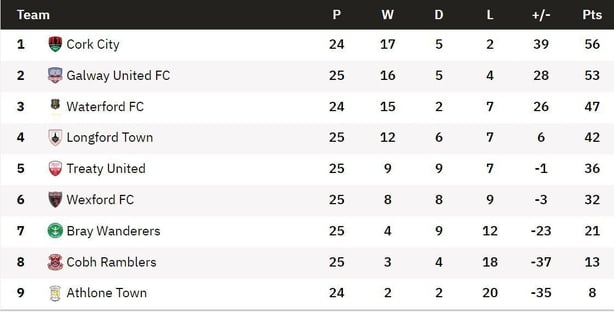 Jordan Adeyemo scored twice either side of a Sam Verdon goal as Longford Town kept their grip on fourth place with a 3-0 win at Bray Wanderers.

Wexford lost ground on the final play-off place after being held to a 2-2 home draw by second-bottom Cobh Ramblers.

Conor Drinan gave the visitors the lead but Wexford equalised through Harry Groome just before the hour mark. But Cobh reclaimed the lead via Sean McGrath three minutes later.