By Peter Branigan at Tallaght Stadium

The Saints brought a 1-0 lead to west Dublin and they created plenty of chances throughout an open game.

But their failure to find the back of the net came back to haunt them as the Bulgarian side did enough to claim the victory with a late penalty by Ivan Turitsov completing the turnaround.

It was a tetchy affair in front of 6,760, with no fewer than 10 yellow cards handed out by Romanian referee Horatiu Fesnic.

After the full-time whistle it all spilled over, with extended squads from both sides involved in a fracas in front of the Pat's supporters, which resulted in the referee brandishing more cards.

Pat's had been the outsiders, even with the advantage before Thursday's game. Tim Clancy elected to stick with the same 11 who had delivered last week's historic result, but the visitors made no fewer than five changes as they looked to chase the game.

And it only took them 12 minutes for the new-look side to draw the tie level. It was a soft one for Pat's after all the hard work on the other side of Europe last time out. A corner from the left from Thibaut Vion was headed home by Mauricio Garcez from five yards without much attention from any Pat's player.

It should have been two 10 minutes later but this time Garcez's effort, after getting onto Brayan Moreno's cross from the right, was outside the near post.

This seemed to spur Pat's into life and Adam O'Reilly had a glorious opportunity to draw them level on the night in the 24th minute. Billy King played in the deft pass, but Gustavo Busatto had been quick off his line, and he spread himself to keep out O'Reilly's low shot.

A couple of minutes later, Busatto was scrambling as Joe Redmond's attempted cross nearly drifted in at the back post - the CSKA keeper had to get a touch to push it over the bar.

Jonathan Lindseth went close for CSKA at the start of the second half, connecting with a cross from Georgi Yomov, but it went just wide of the post with the help of a touch.

But Pat's then moved into the ascendancy, and looked comfortable on the ball. The visitors were only threatening on the break.

Anthony Breslin then had the hosts' best chance of the night as Chris Forrester's cross from the right took a nick, before falling for him five yards out, but he pushed it wide of the up right.

Serge Atakayi came on and nearly had Pat's ahead again, but his effort from inside the box was pushed away by Busatto. It fell for O'Reilly, but again his effort was wide of the right post.

Then came the decisive moment. Garcez controlled a cross field ball at the back post, with Harry Brockbank getting in the way, his hand raised. The referee immediately pointed to the spot, and Turitsov kept his penalty low right.

The scenes afterwards were unfortunate, but Pat's can hold their heads high after living with Sofia for two legs. 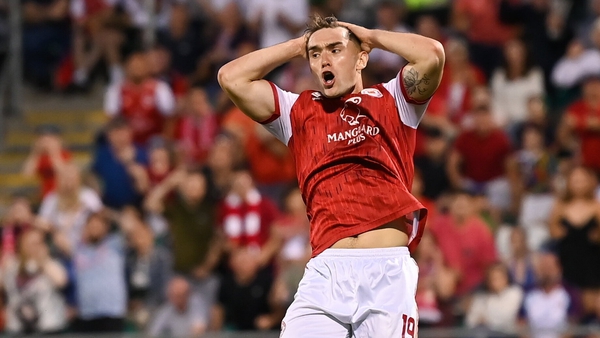 Recap: End of the road for St Pat's and Sligo in Europe