Preston advanced to the second round of the Carabao Cup with a comfortable 4-1 win over Huddersfield, with Republic of Ireland striker Troy Parrott opening his account for the victors.

The visiting Lilywhites, who had failed to score in their opening two league outings, enjoyed a rampant opening 30 minutes where they took complete control of the tie.

Despite ringing the changes, new Terriers boss Danny Schofield could not prevent his side slipping to a third consecutive defeat.

Ryan Lowe's side took the lead inside six minutes when Lee Nicholls parried a powerful Ryan Ledson strike into the path of Parrott, who converted on the rebound.

A nightmare start for the hosts worsened and they fell further behind when Alvaro Fernandez fired in a precise cross for Ali McCann to finish.

Preston then notched a third just before the half-hour mark in almost identical circumstances – again Manchester United loanee Fernandez the provider and McCann with the strike.

Huddersfield’s miserable start to the campaign was compounded even further in the second half when Brad Potts added a fourth, courtesy of a Will Boyle deflection.

Jordan Rhodes slotted a consolation beyond Freddie Woodman midway through the second half but there was no way back for Town.

Elias Kachunga scored one goal and assisted for a second as Bolton swept aside Salford 5-1.

Ian Evatt's Sky Bet League One side suffered a scare when their fourth-tier visitors took a 23rd minute lead through Brandon Thomas-Asante.

But Kachunga-inspired Wanderers, who hadn’t conceded a goal in two previous meetings with their Greater Manchester neighbours, quickly hit back.

Without a goal since last November, the former Sheffield Wednesday and Huddersfield striker headed in Kieran Lee’s cross after 31 minutes.

Unbeaten Wanderers confirmed their place in the next round with three goals in the final half hour. 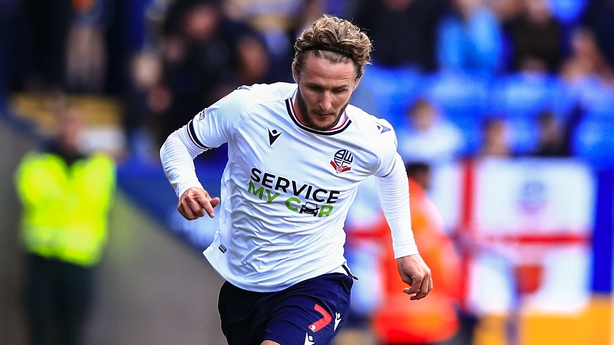 Jack Iredale, an interval replacement for Declan John, fired over a left-wing cross which Kieran Sadlier (above) smashed home after 61 minutes.

Liverpool loanee Conor Bradley made it 4-1 with the game’s best goal 13 minutes from time, firing past Tom King from 25 yards, two minutes after replacing Sadlier.

Dapo Afolayan’s deflected shot completed his side’s nap hand after 86 minutes only for Bolton to finish with 10 men after George Thomason’s stoppage-time dismissal.

Lincoln eased through to the second round with a 3-0 win at Doncaster.

The difference in level between the two sides told on the night as Mark Kennedy's men were rarely troubled, netting goals through Charley Kendall, Teddy Bishop and Anthony Scully for their first win of the season.

Kendall got Lincoln off the mark on 12 minutes when he latched onto a square pass from Bishop six yards out.

Bishop, Chris Maguire and Paudie O’Connor all went close to doubling Lincoln’s lead before the break.

Bishop carried the ball from inside his own half on a mazy run before slotting into the bottom corner to extend Lincoln’s advantage on 47 minutes. 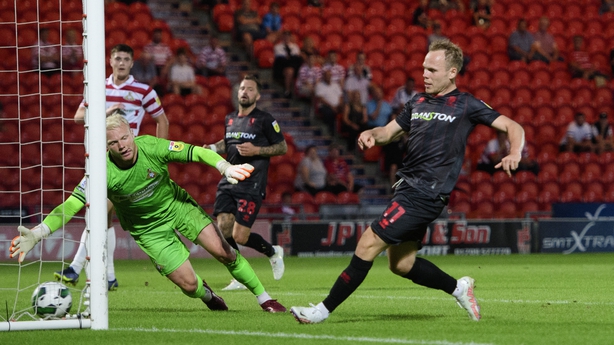 Scully sparked a breakaway which led to the third on 61 minutes. Maguire saw his shot well saved by Jonathan Mitchell only for Scully (above) to slot into an empty net.

A tame effort after a good run from Lee Tomlin was the closest meek Doncaster came to getting on the scoresheet as they suffered their first defeat of the campaign.

It was also a first win of the season for the Dons, who had lost their first two games in League One but controlled the tie despite making seven changes from last weekend.

After a pedestrian start, MK Dons midfielder Darragh Burns tried to liven up proceedings but could not keep his long-range effort down after cutting inside.

Burns was able to get a shot on target later in the first half, but it did not have the power required to beat Sutton goalkeeper Jack Rose.

The Dons then went ahead, scoring their first goal of the season in the process, as former Bohs midfielder Dawson Devoy played the ball through for Grant, who finished crisply into the bottom corner.

Burns had another chance early in the second half when he headed Henry Lawrence’s cross narrowly wide before Matthew Dennis shot over after turning on the edge of the area.

Three second-half goals enabled Portsmouth to avenge their defeat to Cardiff at the same stage five years ago as they progressed with a 3-0 win at Cardiff City Stadium.

After a goalless first half, Joe Pigott, Ronan Curtis from the penalty spot and substitute Colby Bishop scored to send the League One side through.

Cardiff nearly got a nasty shock inside two minutes when Pigott caught Eli King dithering on the ball before firing in a shot which forced Jak Alnwick to go full stretch to make his first save for the club and push the ball away for a corner.

Cardiff’s best chance of the opening period came nine minutes before the break after a run from half-way by Aston Villa loan signing Jaden Philogene-Bidace set up Mark Harris for a shot which was cleared off the line by the lunging Sean Raggett.

Portsmouth made the breakthrough in the 58th minute when a poor defensive header by Curtis Nelson allowed Curtis to burst into the box and set up Pigott, whose scuffed shot went in off the post. 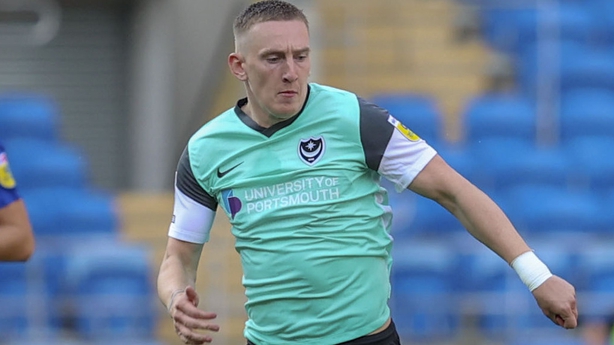 Ten minutes later a pull on the shirt of Michael Morrison earned the visitors a penalty which Curtis (above) dispatched with aplomb.

Then Bishop rose higher than anyone at the far post at a corner and headed home for the third goal 18 minutes from time.

To add insult to injury, Cardiff debutant Daley-Campbell was sent off in the last minute for a challenge on Joe Rafferty.

Morecambe produced one of the shocks of the first round as they beat Championship side Stoke 5-3 on penalties after the game at the Mazuma Stadium finished 0-0 after 90 minutes.

The victory was all the more memorable for the League One side as they were forced to play the final 28 minutes of the game with 10 men after midfielder Jensen Weir was harshly sent off for two yellow cards in quick succession.

Morgan Fox was the Stoke player who failed to hit the target and despite Will Smallbone, Sam Clucas and Jordan Thompson beating Connor Ripley from the spot the home side took the tie.