Antonio Conte believes Tottenham are moving in the right direction after a busy summer transfer window but warned they cannot yet focus on closing the gap to Manchester City and Liverpool.

Spurs have made six major signings after a strong finish to last season saw them beat rivals Arsenal to fourth spot and Champions League qualification.

Tottenham begin the new campaign at home to Southampton on Saturday but the Italian tried to play down talk they could battle with Premier League champions City and Liverpool, who have both had their respective managers of Pep Guardiola and Jurgen Klopp in position for more than six years.

"I think we're going in the right direction but you know very well you need to have a bit of patience," Conte said.

"We know that in England it is difficult to fight to win but we want to try to be competitive, to try to improve on last season and this is our target. If you ask me about City or Liverpool, my answer is we are talking about two of the best clubs in the world that are working with the same coaches for seven (sic) years.

"Now they are in my opinion in a position that is very difficult for the others to close the gap but we have to do this. Also because (to catch) a City and Liverpool, you have to spend £100 million for six players, they go and spend that for one player or two player £100 million and this is the difference.

"You have to run behind and they stay in front of you but you know very well they deserve to stay there because they work very well to have the same coach and to back the coach, Klopp, Guardiola and (Thomas) Tuchel and they deserve this.

"To become a strong team you need to have stability and a vision. The idea has to be very clear and then you will see you go step by step and try to reduce this gap."

After taking over at Tottenham in November, Conte experienced a number of highs and lows during his first few months in charge.

The 53-year-old was able to guide Spurs into the top four but demanded his ambition be matched at the end of the campaign.

The response was the permanent signings of Ivan Perisic, Fraser Forster, Yves Bissouma, Richarlison and Djed Spence while defender Clement Lenglet joined on loan from Barcelona.

But Conte is not getting ahead of himself when it comes to competing with City and Liverpool, adding: "Our target in this moment is not to close the gap.

"It's to try to be better compared than last season. We know that last season we reached the fourth place and in my opinion it was a big, big achievement, especially as we finished the season with only 13 players.

"The first target, our target, the club target was to try to improve the squad in quality and numerically, because also with the numerical aspect of the squad it was not enough. It was our first target.

"Then you know very well that you can't reach the best, the optimum in only one year or only after seven months. You know that you need a bit of patience but at the same time it's important to have ambition to try to be competitive, to try to fight for the best.

"The ambition has to be the best. Then the reality can be different but our ambition, because this type of ambition can push me, push my players, the club, without to be presumptuous or arrogant I repeat, but this ambition has to push us to give 120% in every day of our life in our work."

Spurs will be without Oliver Skipp (heel) on Saturday and need to check on new signing Bissouma due to a minor hamstring issue. Fellow summer addition Richarlison is suspended. 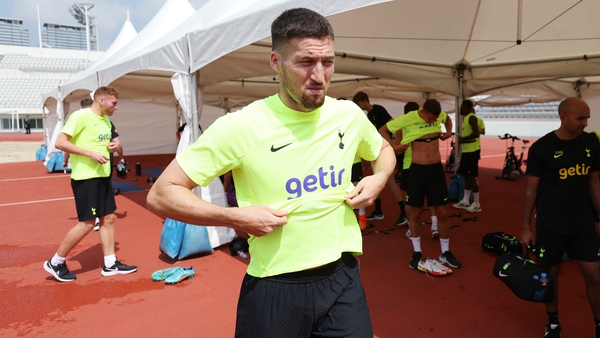