Stephen Bradley is convinced that his Shamrock Rovers side have the quality and capability of beating Shkupi over two legs to progress to the next stage of the Europa League.

However, the Hoops boss acknowledges that his team must perform at their very best to get the better of a side that he labels "as dangerous as any faced in Europe".

The first leg of the Europa clash takes place at Tallaght Stadium tomorrow night, with the away leg in against the North Macedonia champions set for next Tuesday, and should Rovers progress, they will be one win away from the group stages of this year's competition.

Bradley has done his homework on the travelling side and he expects the front four to provide a real handful for his defence with two attacking wide men combining with a powerful duo leading the line, offering an effective direct style of play.

"Very, very dangerous, as dangerous as any team we have played in Europe in terms of the attributes that they have," said Bradley, speaking to RTE Sport.

"Any team that can run Dynamo really close over two legs show the quality that they have.

"We have to respect them but like in any game, we have to impose our style and our presence on the game as soon as possible

"And if we can do that, we know that we have enough to win the game and the tie, but we have to be at our very best to go and do that."

Bradley maintains that the players are well versed in their specific roles for the vital European night in front of what should be a large vociferous crowd at Tallaght Stadium, however, he stressed the need to keep things simple and succinct in terms of preparing his side for the game.

"All football teams are lucky in terms of the information that is out there and can access it very quickly," said Bradley. "As soon as we knew we were playing against them, the next day we have all the information we need on them.

"You give them a bit of everything without overloading them as well. As a player the last thing you need is too much information. You have to get the balance of understanding what you are against, how you can hurt them and how they can hurt you, but then you have to play with freedom as well."

Two routes remain for Hoops to make it to the group stages of a European competition this season as the winners of the Shkupi tie will face either Qarabag or Ferencvaros for a place in the Europa League group stages - a Rovers win would see also offer the luxury of Europa Conference group stage football.

Should the Dublin side bow out of the upcoming Europa tie, they will find themselves in a head-to-head with Ballkani (Kosovo) or Klaksvik (Faroe Islands) for a spot in the Conference League group stages.

And that remains the aim for the Hoops manager who is looking to take his side further than last season and into the group stages of either competition.

"Our incentive is to improve on what we did last year," said Bradley.

"We fell short at the final step and our aim is to make sure we improve on last year and that means qualifying for a group stage, and whether that is a Europa or Conference, that is our aim and hopefully we can do that."

Bradley will have a strong squad to choose from, however, new signing Simon Power is a doubt, while Jack Byrne’s chances of being involved are rated as only 50:50.

"Simon is struggling, he picked up an injury on Monday in training," said Bradley. "Pico (Roberto Lopes) is obviously out for another seven weeks and Jack is 50:50."

Watch CSKA Sofia v St Patrick's Athletic live on the RTÉ News channel on Thursday at 6pm, with live blog on rte.ie/sport and the RTÉ News app, including updates on Viking FC v Sligo Rovers and then Shamrock Rovers v Shkupi at 8pm. 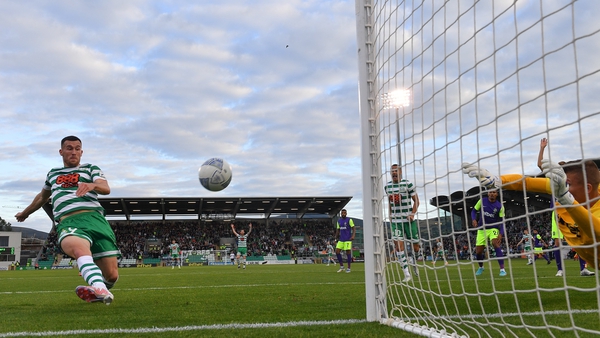 Rovers beat Ludogorets but bow out of Champions League