Niamh Fahey says the Republic of Ireland will take inspiration and motivation from England's Euros glory.

The Lionesses beat Germany 2-1 after extra-time at a sold-out Wembley on Sunday evening to win the country's first major soccer tournament since the 1966 World Cup.

Fahey has just signed a new deal with Liverpool after helping the side to the FA Women's Championship title last season.

The 34-year-old has had a close view of the euphoria that's greeted England's success, and though she was quick to pile praise on the tournament winners, Fahey also admitted it's ramped up her desire to get to the big stage with the Girls in Green.

"The Euros has been an unbelievable competition: the quality, the attendances, and everything that goes with that," she told RTÉ Sport.

"Then England topped it off by winning it, the home nation, and just the buzz that that has created around women's football.

"They are an inspiration, a motivation, and you just have to admire that team and (manager) Sarina Weigman, the way they've gone about their business and delivered under the highest pressure.

"It'd be great now if we can manage to qualify for a major finals. Ultimately that's where we want to be. It was tough watching in, but it definitely stirs the motivation."

Ireland can seal a place in the play-offs for the 2023 World Cup if they beat Finland in Tallaght next month.

Qualifying for the Australia and New Zealand-hosted event would be a huge breakthrough and Fahey believes we're at the precipice of an explosion of interest in the women's game.

"I think the legacy from this tournament is going to be huge, especially here in the UK.

"There's been so many topics of conversation around football in girls' schools, having access to football - a lot of them aren't event able to play football in school.

"I can imagine the numbers (of girls) wanting to join football teams is going to go through the roof. Fair play to the FA and England for delivering, and inspiring a whole new generation. It's brilliant for the women's game.

"It's unbelievable what we're going to see in terms of the women's game, how it's going to push on from here - both at home in Ireland, in the UK and worldwide really. It's been a watershed moment." 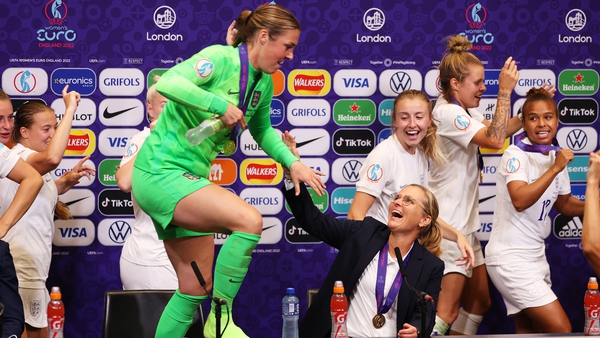