Thomas Lonergan scored the goal that lifted UCD off the foot of the Premier Division table for the first time in five months as the Students came away from Head In The Game Park with a fully deserved point.

The 18-year-old striker has one of the league's least enviable tasks this summer, replacing the goals of Liam Kerrigan, now of Como, and the injured Colm Whelan. He has taken to his task with aplomb – notching four goals in his last five games now as UCD gain the upper hand, for now at least, over Finn Harps in the battle to avoid automatic demotion.

His goal in first half injury time cancelled out Adam Foley’s early opener. For Drogheda, this was another opportunity to move closer to the band of sides above them missed. They draw too many games.

With ex-UCD left back Evan Weir suspended following his sending off against Shamrock Rovers, Dane Massey returned to the Drogheda starting line-up.

Andy Myler made three changes to the side that comfortably beat Cockhill Celtic in the FAI Cup on Friday. Evan Osam, Alex Dunne and Donal Higgins came into the team. Key man Jack Keaney served a suspension.

The visitors arrived at Head In The Game Park knowing that a point would be enough to lift them off the foot of the table, a position they had occupied since the very early weeks of the season. In fact, it was a 4-2 defeat away to Drogheda that had condemned them to last place.

Victories against Sligo in the league and Cockhill in the cup, either side of a home loss to Shelbourne, meant they at least arrived in as promising form as they have found in the campaign to date.

They were almost instantly on the backfoot due to Foley's third minute goal. Lorcan Healy’s pass out was hit straight at Dayle Rooney. The ball was worked to Dean Williams and then Darragh Markey, who’s low cross found Foley unmarked at the back post.

Williams himself passed up a presentable chance to double the lead with United posing a constant threat in the opening stages. The Markey-Foley double act almost produced another goal but the striker’s shot was off-target.

UCD, to their credit, grew into the game. Donal Higgins shot wide and Lonergan had a shot blocked by Georgie Poynton. He also let fly from range before he levelled it seconds before the half time whistle.

Andrew Quinn’s skied and attempted clearance. When the ball landed, Dara Keane’s shot deflected into Lonergan’s path. It fell perfectly for the striker who made no mistake.

He could have had another double – he notched two in the FAI Cup on Friday – but a second half header hit the upright. Both sides contributed to a wildly entertaining second half. Sam Todd made a flying block to deny Williams and Healy produced the save of the game, diving low to deny Rooney at his near post.

Kevin Doherty’s side travel to the north-west on Friday to face Harps, where UCD will hope for a favour. 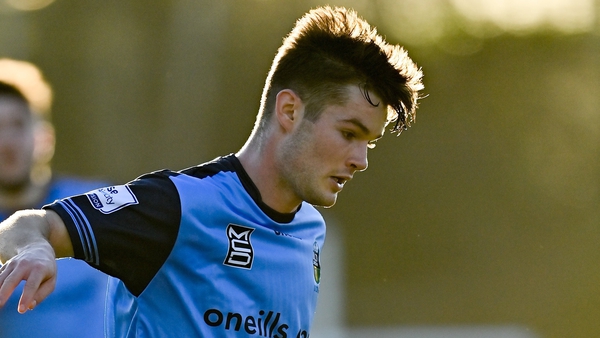