Liverpool midfielder Fabinho admits victory over Manchester City in the Community Shield was made more enjoyable because of the quality of opposition.

Pep Guardiola's side have won the Premier League four times in the last five campaigns, denying the Reds by a point in two of those years.

And although the result at Leicester’s King Power Stadium has no real bearing on the forthcoming season, the Brazil international nevertheless enjoyed victory over City – only their third in 11 meetings since winning three times in the 2018-19 campaign.

"Of course, it is always important to win trophies," Fabinho said.

"Winning against City, I’m not going to lie, feels better because they are the best team in England so it feels good to beat them.

"I think it is the best way to start the season. I think it is important for us because it was a really intense game, it was tough physically.

"All the players who played 90 minutes, it was the first time they had done that this season – in pre-season we didn’t play 90 minutes.

"It is good for the legs to be better physically for the start of the Premier League." 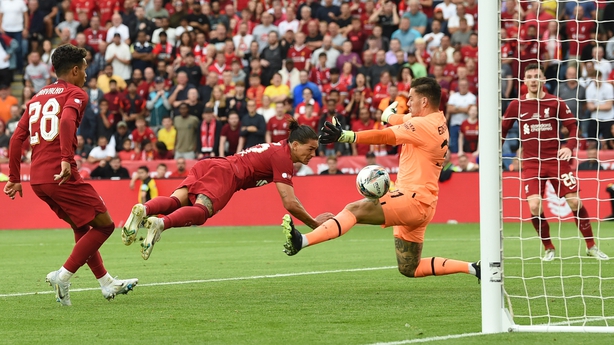 Saturday’s match essentially turned on the second-half introduction of summer signing Darwin Nunez, who won a penalty and then scored to clinch the 3-1 win.

The Uruguay international may have to wait a while longer for his first start as, even with a full pre-season behind him, manager Jurgen Klopp has a tendency to introduce new arrivals slowly.

Fabinho, who experienced the same when he signed in the summer of 2018, understands why that happens but believes the ball will always find a "proper number nine" like Nunez in the penalty area.

"He is in a period of adaptation. We saw he is getting better," he added.

"In the first game of pre-season he didn’t know the team really well but we have done three weeks of training so he knows a little bit the way we play.

"We are learning a little bit more about the way he plays. We know he is fast and strong and a proper number nine who will be in the box.

"To be honest, we always want to play and always think we are ready to play in a new team and a new league and are ready for the intensity.

"But we learn from the players who play longer at Liverpool so it is important for him to learn with Bobby (Roberto Firmino) and Diogo (Jota).

"He has a really good relationship with Bobby, they are always together and I think Bobby gives him some tips so it will be important for him to learn from a player like him.

"But he is the kind of player like Luis (Diaz) – you can put him in the team and he will score goals and do a good job and he will give a lot of work for the opposition defenders."