Aymeric Laporte will miss the start of Manchester City's Premier League title defence after undergoing knee surgery in the summer.

Manager Pep Guardiola has confirmed the Spain international could be out for at least a month after playing through the pain barrier in the closing matches of last season.

City were hit by a number of other defensive injuries during the run-in with John Stones, Kyle Walker, Ruben Dias and Nathan Ake all affected.

Speaking at a press conference to preview the Community Shield against Liverpool on Saturday, Guardiola said: "Laporte is injured. He had knee surgery after last season. He played the last two or three games with an important injury.

"He made an incredible effort to do that but he could not continue.

"So far he is doing really well but you have to be careful because it is a knee. He needs time. I think August he will be out, but maybe in September he will start to be with us."

Guardiola confirmed City are hoping to bolster their defensive ranks by signing a new left-back but refused to be drawn on speculation linking the club with Brighton's Marc Cucurella.

The departure of Oleksandr Zinchenko to Arsenal over the summer has left Joao Cancelo as the only senior, specialist option in the position.

There have been reports that Spaniard Cucurella has handed in a transfer request at the Amex Stadium but Guardiola would not comment.

"He is a Brighton player. I cannot say anything else," he said.

On the general issue of whether City would like a left-back, he said: "If it is possible, yes. If not, we stay with what we have.

Both could make their City debuts this weekend in the traditional season curtain-raiser, which is being played at Leicester's King Power Stadium this year as Wembley is readied for the Euro 2022 final.

Guardiola could also take the opportunity to look at two other new recruits in goalkeeper Stefan Ortega and forward Julian Alvarez.

"The quicker they settle the better, my feeling is they will not take time. The way they listen, they behave and from the few games they've played, I think they are going to settle OK," he said.

Guardiola admits he has not had time to do all the pre-season work he would have liked but is looking forward to getting under way.

He said: "Two and a half weeks of pre-season is too short but I saw many good things in this period, in the two games we played, and with the guys we have we are going to move forward.

"It is the first title, it is an honour to play this competition. We are going to try and do a good game against a tough opponent."

Watch the Euro 2022 final, England v Germany, on Sunday with RTÉ Sport. Live television and streaming on RTÉ2 and RTÉ Player with news and a live blog on RTÉ News app and on rte.ie/sport. 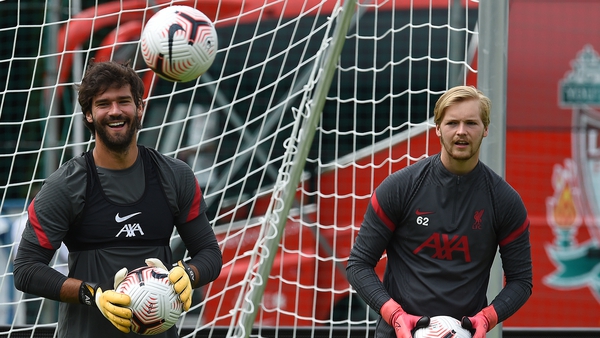 Alisson and Jota out of Community Shield